Online Gambling » Are the Miami Dolphins Purposely Meant to Lose This Season?

Are the Miami Dolphins Purposely Meant to Lose This Season?

Many expert sports bettors predicted that the Miami Dolphins would be the laughing stock of the league this year, and if their 59-10 Week 1 defeat against the Baltimore Ravens is anything to go by, they weren’t wrong. The Ravens practically steamrolled the Dolphins, slightly in part due to the fact that the team gifted them nine penalties.

But what were fans to expect, when Miami spent most of the offseason revamping their entire squad with new players and coaching staff. Former New England Patriots Linebackers coach Brian Flores was appointed as new head coach and journeyman quarterback Ryan Fitzpatrick (who has been with eight different teams at this point) was named starting quarterback.

When he first arrived, Flores spoke about changing the team’s uneven form, but it now seems that this isn’t exactly the case. Rather it seems as if the team is looking to enter a stage of team building, in which bad results don’t matter until at the very least the New England Patriots don’t rule the AFC East. And, current Dolphins’ players don’t seem all too happy about this fact with some reportedly asking their agents to be traded from the team.

This has led many to accuse Flores and others in charge of management at the Dolphins of purposely tanking the team. Unsurprisingly, Flores has come out and denied any such claims but there is evidence to the contrary. 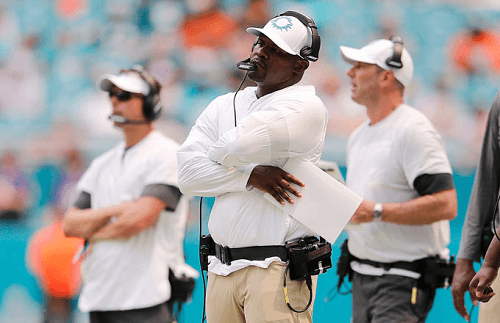 Although many believe that the current Miami roster was degraded during the offseason to the point of it no longer being at the level of a professional team, there are still some quality players on the squad whose talents are being wasted.

Overhauling a team should not mean that a team approach a season without the goal of victory in mind. Although staff members may be looking towards future wins, those may unfortunately never come, and there may have been loads of opportunities lost in the process. (The Cleveland Browns are a perfect example of how not to perform team restructuring, especially given their Week 1 blowout).

It is important to note that there are loads of ways to build a great team without farming for top draft picks. Coaches tend to forget that players like Tom Brady and Joe Montana were completely overlooked when the draft came around, and were picked up by their respective teams in the sixth and third round respectively.

The NFL is filled with undervalued players who have the potential to help lead their team to big victories if the coaches in charge were actually paying attention to what is going on with the team. And, this could be the case with the Miami Dolphins at the moment if the team is purposely tanking.

All Miami Dolphins can hope is that their team’s form picks up soon, and that Flores isn’t purposely trying to tank the team in the hopes of maybe building a better tomorrow (which in itself, isn’t guaranteed).

Check out the other NFL news here: