Another week another UFC fight to look forward to. UFC 251 comes to our screens and if you’re in Abu Dhabi you get to witness the action live. The main fight on the card was originally between Kamaru Usman and Gilbert Burns. However, burns tested positive for Covid-19 and had to be replaced with Jorge Masvidal. As much as we were anticipating the Usman-Burns action we are sure that this will be an epic battle to watch. And if there’s one thing you can be sure of its that any fight with Usman is bound to have you on the edge of your seat.

This particular fight card has MMA salivating with the equally exciting side shows. The other fights on the menu are the featherweight matchup between Alexander Volkanovski (not to be mistaken with Volkov who recently lost to Curtis Blayde) and Max Holloway.A bantamweight title bout between Petr Yan and Jose Aldo is also on the fight card.

We have looked at each of the fighter’s stats and tried to condense our odds and predictions. Who’s your money on? If you haven’t decided, let’s see if we can sway you or at least give you an idea of who not to bet on. 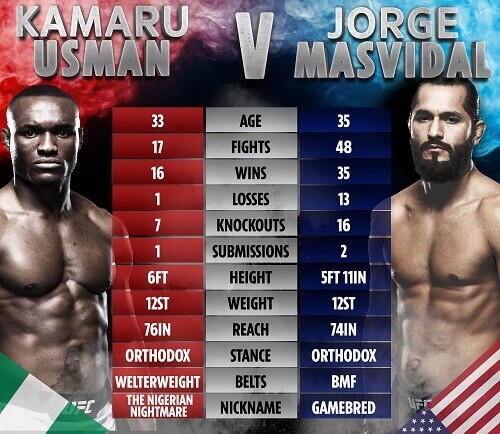 Now I’m not too sure whether the venue change will affect earlier predictions. This particular event was set to happen in Pert Australia initially before it was moved to the UAE.

Kamaru Usman, the Nigerian born American who was chosen to participate in the Ultimate Fighter back in 2015 has a solid record. However as solid as it is it does not lean or favour one particular strength over the other. Usman has 17 fights under his professional belt, and boy are is stats impressive. He has won all matches except one. and his knockout wins are equal to his victories by decision. What you can be sure of is that 16 out of 17 times he’s most likely to win.  But what you may have trouble predicting is whether he’ll achieve victory via a knockout. so, let’s see what his opponent is capable of.

Jorge Masvidal comes in to the ring with a 17 year long professional career. He has 48 fights in his resume, 35 wins and 13 losses.  His fight style is more traditional boxing and kickboxing which comes out a lot in his victories. He has kneed many a fighter into TKO. At first glance one might get carried away with the fact that his opponent only has one loss. However, once you factor in Jorge’s career span and the number of fights he has, it puts everything in perspective. 35 victories out of 48 is not light work. It’s important to mention that of the 13 losses only three losses are by submission and knockout.

Both fighters are the same weight, with Usman just an inch taller than Jorge. In the previous match up, both Burns and Usman were the same age and weight but Kamaru had a clear height advantage. It seems that height won’t factor much in in this pairing.

Jorge Masvidal comes into this fight with a lot to prove having been passed over for Burns in the first place. So, I’d say he’s a very strong contender. He also has way more experience, his professional career started in ’03 and he has 48 fights under his belt. Of those 48 he has won 35.

When it was a Kamaru vs Gilbert fight, it looked like Usman would claim the victory, albeit by a hair, but a victory nonetheless.

Based on the numbers, Usman has a decidedly better record winning 94% of his fights. Whereas Masvidal has 72% victory record which is quite stellar considering he has been professional twice as long as his opponent.

I could go on and on about the what ifs and possibilities but one has to pick side. I will take gamble and say my money is on Usman, although I understand why the default choice would be Masvidal. What I will say is, Kamaru’s forte is TKO by punches and his single loss was by submission. Whereas, Jorge, who is also lethal with TKO by punches, has been knocked out before. Do what you will with that information