Much has been said of Eli Manning as of late, with questions circling around his form and whether he should remain starting quarterback of the New York Giants. While at the start of the season, there were some fans who wanted to hold on to Manning, there were many vocal groups that believed Daniel Jones was putting up better form in preseason and that Manning needed to graciously step down from the role. Despite these calls, Manning started the season in the starting quarterback role.

After a 0-2 start to the season, Jones has replaced Manning as the Giants starting quarterback, and many have hailed as the end of the Eli Manning era at the Giants. To say that Manning will not be remembered as a New York Giants legend in years to come would be erroneous. He did after all, lead the team to two Super Bowl victories against the domineering New England Patriots. (Who could forget the infamous “helmet catch” that has largely been referred to as one of the best Super Bowl plays of all-time?)

The question most NFL fans have been asking now: is whether Manning will choose to stay with the New York Giants, even if it is on the bench. While Manning himself has stated that he has no plans to waive the no-trade clause in his contract, there is a chance that this could in the future. Jones still needs to prove himself capable of keeping the starting role, and Manning may still have something left to give the Giants.

However, our NFL team at Gambling360.com have been pondering on the question of should he choose to trade, where will he go? Well, here are three popular suggestions we thought could be likely suspects.

3 Teams Eli Manning Could Be Traded To 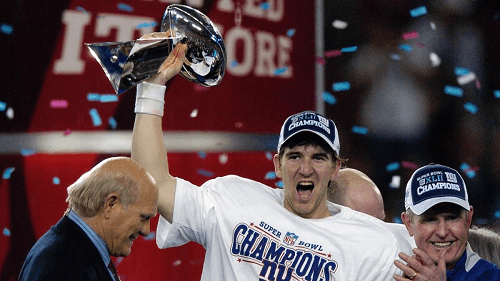 Andrew Luck’s retirement left a giant hole in the Colts offense, and it seems that Jacoby Brissett has more than steeped up to try and fill it. Brissett has had a pretty good start to the season having already thrown for five touchdowns in the last two games, with one interception.

The Colts are probably looking at turning the Brissett into their permanent starting quarterback if possible. However, if he shows that he is not exactly up to the task as the season wears on, having a player like Eli Manning on the squad is going to be looking mighty fine. (He may become the second Manning to lead the Colts to a Super Bowl victory).

Unfortunately for Steelers fans, Ben Roethlisberger will be out for the remainder of the season. Mason Rudolph is lined-up to try and fill Big Ben’s shoes but it remains to be seen whether or not he will be successful in doing so. His first performance this season against the Seattle Seahawks saw him throw for two touchdowns and an interception, so there does seem to be some positives and negatives about him.

It does seem that the team is looking at other options, with Paxton Lynch reported to be currently practicing with the squad. Sometimes, however, the best fix involves getting a player with experience rather than focusing on youth (despite what the Giants might think).

The Jaguars were hoping that former Super Bowl MVP Nick Foles would be the player to lead the team to some positive season win percentages this season, but those dreams went up in smoke when Foles broke his collar bone in the first game of the season.

Gardner Minshew has since stepped up to take on the position, it has been with limited success. There is a good chance that the team may be looking for somebody with more experience in the starting position to lead the team to a positive season score while Foles is out, and that person could be Eli Manning.

Check out our other latest sports betting news here: