Four Winds Casinos, which is owned and operated by a tribal nation called the Pokagon Band of Potawatomi Indians, announced that is has signed a new deal with sports betting technology corporation, Kambi. The deal allows Kambi to infiltrate the Michigan sports betting market, a first for the company. Its new role will be to run the sportsbooks and mobile apps for tribal casinos belonging to the Pokagon Band of Potawatomi Indians.

During a recent conference, Kambi CEO Kristian Nylén said that the company has worked hard to establish itself as a trusted brand and that the tribal gaming boards recognize their efforts. Soon after the conference news of Kambi securing a contract with the Pokagon Band of Potawatomi Indians to manage their sportsbooks and mobile apps in the state surfaced.

Various other companies were in the running, but tribal leaders ultimately settled on Kambi. The selection process was described as competitive, and all the stakeholders had to bid for the company of their choosing. 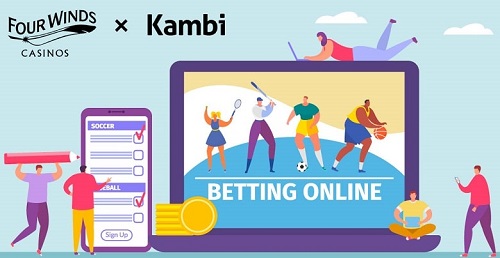 What the New Partnership Entails

The Pokagon Band of Potawatomi Indians owns three tribal casinos in Michigan. The casinos are located in Hartford, New Buffalo, and Dowagiac. The New Buffalo casino is the brands’ flagship business. Kambi will manage the sportsbooks and mobile apps of all three casinos. The company plans to create self-service kiosks at each of the properties. Customers will find all the information that they might need at the kiosks. It also plans to introduce its “bring your own device” initiative to the casinos, which will allow customers to place wagers from their cell phone devices.

In a statement, SVP of gaming operations at Four Winds Casinos, Frank Kennedy said that they are thrilled about the new contract with Kambi. He believes the partnership will take sports betting in the state to new heights, and looks forward to making more announcements about future plans.