Gardner Minshew Could Be The Future of the Jacksonville Jaguars

When Nick Foles suffered a broken clavicle in the Jacksonville Jaguars’ week 1 matchup against the Kansas City Chiefs, Gardner Minshew II was forced to take up the role of starting quarterback. Many fans had doubts that the team would be able to accomplish much this year with Minshew in the starting role.

Selected in the sixth round and 178th overall in the 2019 draft, many quickly undermined Minshew abilities. After three games, it seems that the tide on Minshew is really starting to change though, and that he may be a likely contender for future of the franchise.

Although two of the Jaguars last three games have been losses, Minshew personal achievements have been unprecedented, some of which include the following:

With such figures, it really is no surprise that many are now considering the prospect that Minshew may be the man to lead the team in the future, and not Foles. Although it is important to keep in mind that it is still early days, if Minshew continues with his current performance, head coach Doug Marrone is going to struggle to pick a starting quarterback for future games. 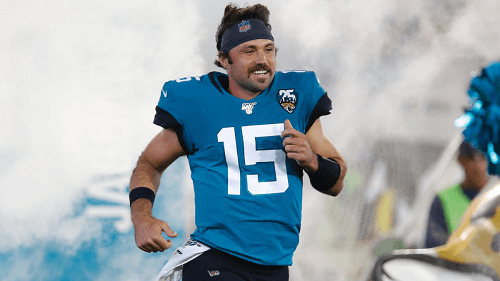 Many avid college football fans would argue that it should not really be a surprise that Minshew is proving to be a class player. He did after all win the Johnny Unitas Golden Arm Award as well as the Pac-12 Offensive Player of the Year in 2018. Despite this, NFL scouts overlooked him when draft time came around.

Perhaps, the biggest reason for Minshew being ignored is that he does not espouse all the traits traditionally associated with a starting quarterback. At 6ft1, he is somewhat shorter than many of the other NFL players in the same role, and his arm strength was also supposedly not quite at the level that many scouters would’ve liked it to be. (This all proves very surprising though as Drew Brees, Russell Wilson, and Baker Mayfield have all proven that quarterbacks don’t need to have these traditional attributes to contribute to the game.)

However, it seems that most scouters failed to pay attention to the factors that may make up for these shortfalls, including Minshew’s great accuracy and his overall determination to win games. And, it seems that the Jaguars may have profited from this; a player that was probably meant to be a second-string or third-string quarterback could land up being the face of the franchise.

As mentioned above, it’s still early in Minshew’s career and these last three performances may have been lucky, but we sincerely doubt it.

Check out the other latest NFL stories: