Online Gambling » Is Patrick Mahomes Worth a US$200 Million Contract Extension?

Is Patrick Mahomes Worth a US$200 Million Contract Extension?

Undeniably, Kansas City Chiefs quarterback Patrick Mahomes is one of the best players in the NFL at the moment. After a rookie season that saw him play only one game, Mahomes was dedicated to proving that coach Andy Reid had made the right choice naming him starter in the 2018 season, and to say that Mahomes lived up to all expectations would be an understatement.

The quarterback was named NFL Most Valuable Player for the 2019 season after passing for 5000 yards and 50 touchdowns in a season. He also helped lead the Chiefs to their first AFC Championship game in 26 years, where they were narrowly beaten by the New England Patriots. Aside from being named MVP, Mahomes picked up loads of awards, and was even voted fourth best player in the league in 2019 by his peers.

Off-field, the quarterback became the fastest ever player to be elevated to a 99 rating in Electronic Arts’ Madden NFL video game series – a distinction that is only given to a handful of players each and every year. (Not even Tom Brady was given such a rating in this year’s instalment.)

It seems that all of this effort will soon be rewarded as insiders have suggested that Mahomes may soon become the first player in NFL history to receive a contract extension worth more than US$200 million. Some have questioned whether or not Mahomes, who is currently in his third professional season is worth that kind of investment.

Patrick Mahomes: Because You’re Worth It 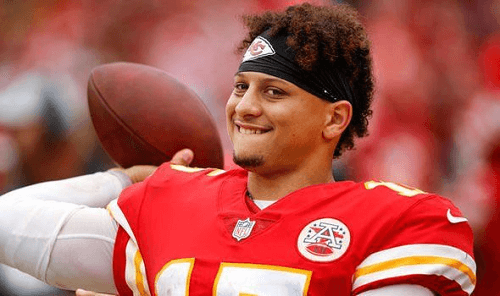 One would think that there is very little to debate about with regards to Mahomes. At 24 years old, the Kansas City quarterback has already broken a load of league records ,and is bound to set many new ones in the years to come.. He has even surpassed records posted by some of the sport’s biggest ever names. Peyton Manning is among the greats whose records have been broken, If his age and average retirement age of a quarterback are two things to go by, Mahomes also has at least another decade in the league if injury does not claim him.

In addition to all this, Mahomes has started his third season in the league with some absolutely insane states. Although he has only played three games so far, he has already amassed 10 touchdowns, and 1195 passing yards with no interceptions. His rating stands at 134.9 at the moment, which is more than 40 points above second place Aaron Rodgers (who actually holds the record for highest season passer rating at 122.5).

At this present moment, Seattle Seahawks quarterback Russell Wilson holds the biggest contract at the league. Wilson signed a four-year $140 million contract extension during the offseason. Wilson has proved his value to the Seahawks time and time again by helping them make the playoffs in all seasons he has been starter but one.

Although Mahomes has yet to lead the Chiefs to a Super Bowl title, he has already more than proved his worth to the team. The question really isn’t whether Mahomes will get a US$200 Million contract extension, but when will the deal be inked.