Conor McGregor as a headline at UFC is always a big crowd drawer. The upcoming McGregor vs Cerrone UFC 246 match on the 18th of January this coming Saturday will have many sports bettors on the edge of their seats.  Mostly because of the notoriety and the dramatic antics that the Irish professional MMA fighter has become famous or rather infamous for. Are you looking forward to placing wagers on this UFC McGregor fight? We are sure many of you are, that is why we have listed the top sports betting sites in the USA with the best Cerrone McGregor UFC odds. The McGregor Cerrone is no doubt the highlight of this UFC 246 card. That comes as no surprise because McGregor vs anyone would be a highly anticipated fight. Naturally, the Irishman is the favorite while American, Donald “Cowboy” Cerrone is marked as the underdog.

It’s easy to dismiss the American as a sure loss because of the clout McGregor carries. However, we predict a win in the cards for the Cowboy, which is contrary to popular sportsbook odds. Follow along as we defend our choice and prediction.

We will briefly outline a brief stat outline of each fighter.

McGregor has a career record of 21 wins and four losses, five actually if you count the TKO defeat, he suffered at the hands of the legendary Floyd Money Mayweather. Granted that was not a UFC or MMA fixture, but it was loss none the less. 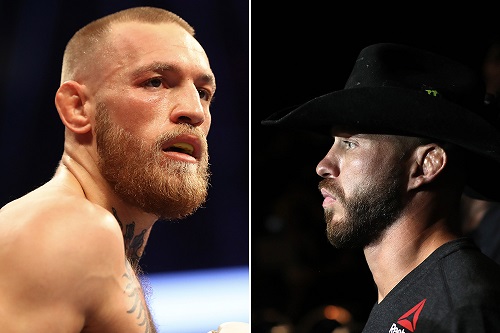 From 2011 to 2016 Conor had an uninterrupted winning streak, just before he announced his hiatus to welcome his first child. That hiatus was short-lived as he campaigned tirelessly to fight Mayweather only to get knocked out. Then at UFC 229, he lost by submission to Russian, Khabib Nurmagomedov, effectively losing his Lightweight Championship title. He has not fought since that loss and had even announced a retirement from the sport. But he’s back. The last time he had a hiatus and came back, he suffered two losses consecutively at the hands of Mayweather and Nurmagomedov.

Donald ‘Cowboy” Cerrone is the underdog in the UFC 246 card however he seems to have a solid record. Cerrone holds the record for the most wins in UFC history. That alone should be enough to speak for his skill set. He has fought in both lightweight and welterweight divisions. He also holds the second-highest wins in the lightweight division.

We predict a win for the American, which works out well since he is the decided underdog and the return on a winning bet will be significant. Yes, McGregor has more at stake, since he’s coming out of a short-lived retirement-cum-hiatus, however, the Irish fighter is known for his big talk which does not always translate into victory in the ring.

As the odds stand with the Cerrone win, we are predicting, and a $100 on the Cowboy will give you $275 in your pocket.