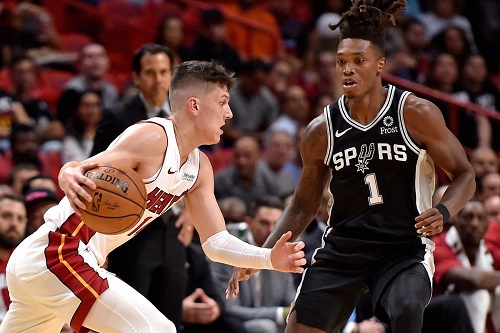 Miami Heat at San Antonio Spurs match up could possibly be one for the books. Miami heat is going into this matchup coming from a win over the Spurs. Miami is currently in second place in the Eastern Conference after winning 106-100 to the Spurs on Wednesday.  The spurs who are one of the dominant teams on the Western Conference have a lot to prove in today’s matchup.

Both teams have a lot in common such as their offense, impeccable wings, and discipline. As per the team the last match there was a slot of struggle with the defense coming from both teams. The slow start works in in Heats favor. Unlike the Spurs, Miami Heat tends to rely on the versatility of its players who complement their wing. Heats defense is also known to be at its strongest at the rim. The Spurs who aren’t known for scoring a lot of their points at the rims also averaged the least amount of shot tries from inside the restricted areas in the NBA this season.

San Antonio Spurs have to work on keeping up with their pace and bring their defense up a notch. DeMar DeRozan who carried the team’s offense in the previous match up may need to come back stronger today. Players such as Patty Mills and LaMarcus Aldridge also need to be watched out for.

A few of the Miami Heat players have played exceptionally well and brought a different kind of consistency to the team that wasn’t there before. The Heats have used its starting lineup of Adebayo, Leonard, Robinson, Nunn and Butler in 33 of their 40 games which has seen player like Adebayo stand out.

The Miami Heat at San Antonio Spurs matchup could possibly end as a close call. However, before we make any predictions, here a few key facts you need to keep in mind before you make any bets.