After a good 2018 season, the Chicago Bears were touted as one of the favorites to make a good Super Bowl run this season. A few questions around quarterback Mitchell Trubisky capabilities were being thrown around but head coach Matt Nagy was somewhat confident in his starter. However, three games into the season, and it is very apparent that the Bears have an offensive problem, and that problem may lie with Trubisky.

Despite winning their last two games, Trubisky hasn’t exactly been posting the best performances. Thus far, he has completed 67 passes out of 103 attempts, and landed three touchdowns. It is also important to note that most of his completed passes have travelled just over five yards. In his last game against the Washington Redskins, he attempted to throw further than 15 yards on only three occasions, and it seems that is all that Nagy allowed Trubisky to do.

It seems that more often than not, the Bears are relying on their defense to get the job done rather than Trubisky to score, and this does not seem like a sustainable plan. Their last two wins came over teams (Denver Broncos and Washington Redskins) that have been struggling this season, and were not really poised to do all that well this season. Should the Bears go up against a real competitor in postseason or even later during preseason, they are probably going to falter because of this.

However, are the Bears’ offensive issues all on Trubisky alone? Or, are other factors affecting the team’s overall performance offensively?

Mitchell Trubisky Needs To Step Up 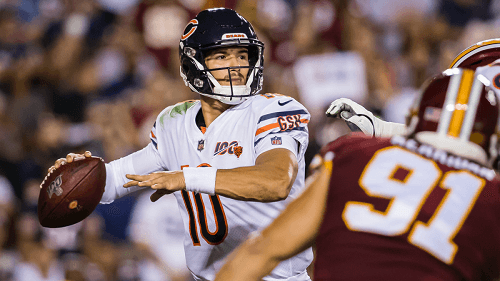 It goes without saying that if the Bears are really going to have a good go at the Super Bowl this year, they are going to have to start landing some big plays. This means that Trubisky is going to have to step up his game, and start connecting with his offensive teammates better in the form of more consistent passing and rushing plays.

The signs that Trubisky has got the potential to take the team places are there but they appear too far and few between. Remember that it took three games for the quarterback to get his first touchdown of the season, and that proves that he is at least part of the Bears’ offensive problem, if not states that is a big part of it.

Over the past few weeks, it does seem that Trubisky has been getting better with each performance. The true test will be with the Minnesota Vikings this week, who have had a relatively good start to the season, going 2-1 in their last three games.

The defense is going to have a tough time keeping running back Dalvin Cook in check. Kirk Cousins (who arguably is suffering from the same short throw syndrome as Trubisky) has also been connecting with his receivers more often than not. It’s safe to say that the Bears will need Trubisky to pull some plays if they are going to be guaranteed a win.

All this said though, it is safe to say that if Trubisky doesn’t pick up his game soon, the Bears may need to look at a trade for a new quarterback or scout one out at colleges for the next draft.