Tensions are rising in the Major League Baseball camp as players and owners struggle to reach an agreement. And if they don’t, the MLB season is off the cards for 2020. Reportedly, the MLB Players Association (MLBPA) is the reason for the stalemate. Over the weekend, the MLBPA rejected an offer of 72 games and 80% pay, saying that further talks “would be futile.”

Instead, Executive Director Tony Clark of the MLBPA says the MLB should set a schedule and call teams back. However, that would give the union grounds to take the league to court over lost wages and damages. Meanwhile, MLB Commissioner Rob Manfred has lost hope after assuring fans that the MLB season would go ahead.

Just last week, he was confident in a return and told ESPN that the stalemate “shouldn’t be happening.” 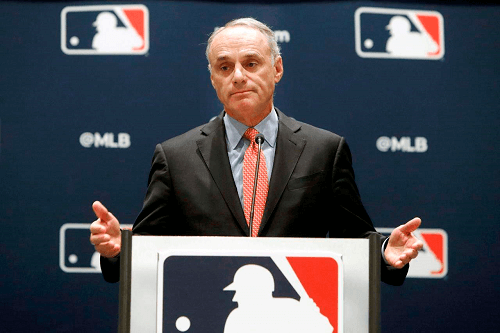 While the country waits for the MLB season to start, oddsmakers are offering lines on the two organizations striking a deal. Two weeks ago, the odds were at “Yes -500,” implying an 83.335 chance. Had you bet $100, you’d only net $20.

In a letter to the MLBPA, Manfred stated that the owners are “100 percent committed” to getting the season back on track. As for the lines on that, bookmakers are offering these odds for the amount of regular-season games:

According to the team owners, they can’t afford to pay full salaries while COVID-19 regulations are in place. Without fans in the stadiums and shortened MLB season, baseball just isn’t profitable. Of course, Manfred’s over-confidence is only succeeding in stirring the pot to upset fans and players.

In recent statements, the commissioner threatened to outright cancel the season entirely. It seems like someone’s batting to thin air. So, who can tell what’ll happen next as the United States grapples with the global pandemic?