In today’s list of simulation games, we have another matchup featuring the New England Patriots. This time they will go up against this year’s Super Bowl runner-up, the San Francisco 49ers at Gillette Stadium. Both teams had a great year in terms of defensive play, with the 49ers having been ranked first in the league and the Patriots second.

Both teams have been rated well in Madden 20, with some big-name players in both squads. The 49ers and Patriots both come into this game off a win against moderately challenging opposition. The Patriots scrapped a win off of the Denver Broncos whereas the 49ers hit the Atlanta Falcons hard. Should we be favoring the 49ers in this one? Or, are the Patriots the legacy team to go for? 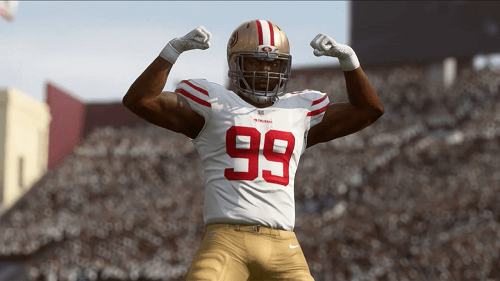 So, let’s have a look at some of the stats in this one:

We think this is going to be a hard-fought battle, especially with both teams featuring great defensive players. Overall, we do think that the game tends to favor the Patriots on more occasions than not (which is why they won the Sim Classic). However, the 49ers aren’t easy opposition.

This is really a 50/50 game. We think that because the game tends to be more in favor of the Patriots, you should go for them. (Although we think that in real-life, the 49ers would probably win.)

How Do I Deposit Money into MyBookie?