Betting on the National Football League’s (NFL) American Football Conference East Division (also known as the AFC East) has proven to be rather predictable in recent years. The New England Patriots have dominated the league for much of the last decade, with the Miami Dolphins, New York Jets and Buffalo Bills sporadically qualifying for Wild Card playoff spots. That said, it seems that the Bill Belichick and Tom Brady partnership will soon be coming to an end, with Brady getting up there in years, and this may open up the division to being a little more interesting.

If you are interested in finding out more about betting on the AFC East in the United States, you have come to the right place. Below we have a look at all US bettors need to know about this division, such as each team’s odds of winning the NFL division and its history, among other things. So, read on and start making some top bets on the AFC East at the best online gambling sites today!

Bet on the AFC East Here

Looking to place a bet on any of the teams in the AFC East? Have a look at the sportsbooks listed down below! They are sure to provide you with some great odds on any NFL bet you ever could wish to make.

What You’ll Find In Our AFC East Guide

US bettors haven’t really had to ponder on the question ‘who is most likely to win the NFL AFC East?’ in recent years. Nonetheless, we have a look at each team’s chances of taking the division this year according to sports betting sites.

History of the AFC East

The AFC East was created in 1960 in tandem with the American Football League (AFL). Originally, the division consisted of the following NFL teams: New England Patriots, New York Titans, Buffalo Bills and the Houston Oilers. The Miami Dolphins would join some years later in 1966.

When the AFL merged with the NFL in 1970, Houston was moved to what is now the AFC North and the Baltimore Colts (who were geographically closer to the other teams in the AFC East) joined the division. The Colts would continue playing in the AFC East despite moving to Indianapolis until 2002, when the teams were once again re-aligned and they were moved to the AFC South.

Since, the removal of the Colts in 2002, the division has seen no other changes. In recent years, the AFC East has grown to become one of the most successful in the Conference. This is mainly due to the dominance of the New England Patriots. 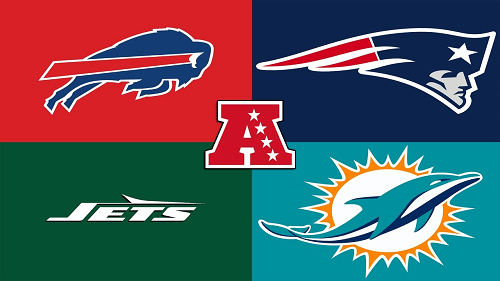 Interesting Facts About the AFC East

Here are some interesting facts about the AFC East that NFL fans may not have been aware of: