American Football Conference North betting (also known as AFC North betting) has been rather exciting in recent seasons, with the Pittsburgh Steelers, Cincinnati Bengals and Baltimore Ravens all having taken the division in recent years, and two of these teams even going on to win the Super Bowl.

The only team in the division all United States bettors have known to bet against is the Cleveland Browns who haven’t made it to the playoffs since 2002. Things seem to be changing though and the division is really opening up, which means more interesting betting opportunities for avid NFL gamblers across the country.

If you are interested in betting on the NFL‘s AFC North, be sure to read our guide below. There we have a look at each of the teams in the division and their chances of winning their respective area this year. With the Cleveland Browns’ recent talent acquisitions, upcoming seasons are sure to be much more competitive than before. Well, at least the top online gambling sites think so!

Bet on the AFC North Here

Looking to get in on that AFC North future before the odds are altered? Make sure to have a look at the sportsbooks listed below. They are sure to provide bettors with some absolutely amazing odds on NFL betting options!

What You’ll Find In Our AFC North Guide

In recent seasons, the Pittsburgh Steelers have often been pegged as the favourites to win the American Football Conference North title. With Ben Roethlisberger at the helm and the team having won two Super Bowl titles in a relatively recent years, it really is unsurprising that this has happened.

That said, recent team developments have led to some changes in the way many sports betting sites believe upcoming seasons will play out. Below is a short summary of each AFC North team’s chances of taking the divisional title this year:

History of the AFC North

The AFC North was formed in 1970, when the NFL merged with the American Football League (AFL), but was at first known as the AFC Central division. It consisted of the Cleveland Browns, Cincinnati Bengals, Pittsburgh Steelers and Houston Oilers (now known as the Tennessee Titans.)

In the early days of the AFC Central, the Pittsburgh Steelers were the most successful team in the division, winning four Super Bowls in the 1970s. The was followed by a period of dominance for the Cincinnati Bengals in the following decade, which saw the team make two Super Bowl appearances but fail to lift the trophy.

The Jacksonville Jaguars joined the AFC Central in 1995, which was the first major change to the division since it was formed. In 1996, the Cleveland Browns attempted to relocate to Baltimore and rebrand as the Baltimore Ravens, and succeeded in doing so. However, the move was met with such great hostility that the Cleveland Browns were reactivated, and the division featured six teams.

When the Houston Texans joined the NFL as an expansion team in 2002, the league underwent restructuring and the AFC North was created and comprised of the Steelers, Browns, Ravens and Bengals.

Since the restructure, the Steelers have been the most successful team in the division, winning a good number of AFC North titles and two Super Bowls. The Baltimore Ravens have also fared pretty well, also picking up one Super Bowl win. Teams based in Ohio don’t seem to have great luck though. 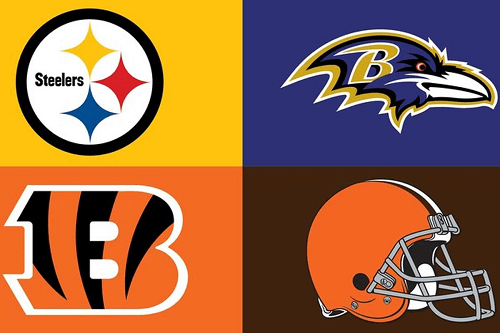 Interesting Facts About the AFC North

Are you a fan of any of the teams in the AFC North? Well, then you may be interested in the following noteworthy facts about the division: