American Football Conference South betting (also known as AFC South betting) has been known to be pretty unlucky in recent years. As the division with the longest Super Bowl drought in the National Football League (NFL), many of the futures placed on the Indianapolis Colts, Houston Texans, Jacksonville Jaguars, and Tennessee Titans have sadly been very unsuccessful. But, with the Jaguars recent AFC Championship appearance and the Colts seemingly returning to form, the drought may be coming to an end soon.

Find out all you need to know about betting on the teams in the AFC South Division down below in our guide. We have a look at the odds to win the AFC South for each team, along with providing a list of the best online gambling sites to place a bet on any NFL team. So, read on and make better bets on these unlucky teams now!

Bet on the AFC South Here

If you’re looking to place a bet on any of the teams in the AFC South, look no further. These are the top sports betting sites for NFL betting. Each is sure to provide US bettors with amazing odds on upcoming fixtures.

What You’ll Find In Our AFC South Guide

Below is a quick look at each of the four teams in the NFL‘s American Football Conference South division:

History of the AFC South

The Indianapolis Colts with Peyton Manning at quarterback pretty much dominated the division for much of its early years, even going on to win the Super Bowl in 2006. This is the only Super Bowl title any of teams featured in the division have won since the AFC South’s formation.

Since Manning moved to the Denver Broncos in 2012, the AFC South has become a lot more competitive. The Houston Texans have been able to pick up some division titles. Even the Jacksonville Jaguars have picked a single title. 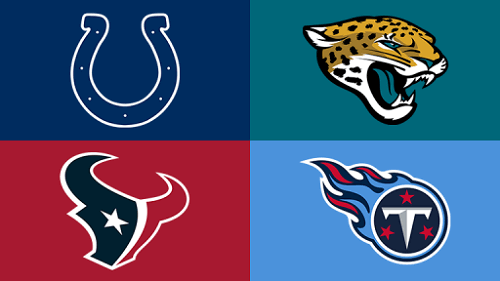 Interesting Facts About the AFC South

Looking to bet on one of the teams in the AFC South? Perhaps, some of the facts listed down below may interest you: