American Football Conference West betting (also known as AFC West betting) has held some rather interesting gains for United States bettors in recent seasons. The division can be one of the most or least competitive divisions in the NFL depending on the year. In recent years, it has been one of the most competitive due to the fine form the Kansas City Chiefs, Denver Broncos, Oakland Raiders and Los Angeles Chargers have been displaying. In fact, the division has won a wild card playoff spot five times in the last six seasons.

If you’re interested in betting on any of the teams in the NFL’s AFC West, make sure that you get a good look at our guide down below. There we have a good look at each team’s odds to win the AFC West as well as the overall history of the division. So, read on and stat making educated bets on the AFC West at online gambling sites today!

What You’ll Find In Our AFC West Guide

The American Football Conference West division is one of the most interesting in the conference. It seems that when one team does well, they all do well. Unfortunately for fans, the opposite seems to be true as well. The good news is that some of the teams in the division seem to be playing relatively well, but who has got the best chance of winning it?

History of the AFC West

The AFC West was first formed in 1960 as the Western Division in the American Football League (AFL). When the AFL merged with the NFL, it became the AFC West and featured four teams; the Denver Broncos, Los Angeles Chargers, Oakland Raiders and the Dallas Texans (which are now known as the Kansas City Chiefs.)

The Cincinnati Bengals, Seattle Seahawks, and Tampa Bay Buccaneers all formed part of the AFC West at one time or another, but later moved on to other divisions. Each of the original teams featured in the division have developed a strong sense of rivalry that isn’t seen with many other divisions due to the limited team changes.

Over the years, the AFC West has been very unpredictable with regards to form. In the early 2000s, the it was considered one of the toughest divisions in the league, but towards the end of the decade many NFL pundits considered it the weakest. In recent years, team form seems to have flipped around again, with the Denver Broncos making two back-to-back Super Bowl appearances between 2014 and 2015, winning once.

The Kansas City Chiefs and Los Angeles Chargers both seem to be having a good go at a Super Bowl appearance too. A future on either of them wouldn’t be a bad decision. 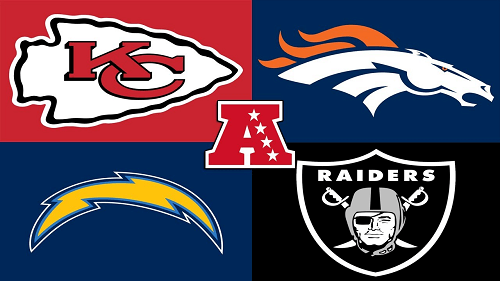 Interesting Facts About the AFC West

Looking to place a bet on one of the teams in the AFC West? Then, maybe some of the facts below will be of interest to you: