Carolina Panthers betting has brought some success for US bettors who have made wagers on the team to win the NFC Championship or to make it to the playoffs. However, unfortunately, no futures on the team to win the Super Bowl haven’t been all too profitable. The team has had some pretty on-and-off seasons in recent years, and some bettors feel that it may just be a matter of time before the relatively young team lifts the Vince Lombardi trophy for the first time.

If you would like to bet on the Carolina Panthers in any shape or form this season, make sure that you stick around! Below we go through all you need to know about betting on the team, including the Panthers odds to win the NFC South as well as the Super Bowl, their overall performance history and the online gambling USA sites to use to get the best odds on betting lines. So, read on and find out more about betting on the Panthers!

Looking for the best Carolina Panthers odds? Well, have a look at the US sports betting sites listed down below. Each is sure to have a wide list of betting lines that will appeal to even the pickiest of bettors in the United States.

What You’ll Find In Our Carolina Panthers Guide

The NFL’s Carolina Panthers did not have the best of seasons last year, failing to make the playoffs with a regular season record of 7-9. This was the second losing season in three years, and also the second since their Super Bowl appearance in 2016. For some time, it seemed that the team was on the verge of breaking through and winning their first Super Bowl, but it doesn’t really seem if that is the case anymore.

Star quarterback Cam Newton has been questioned throughout his entire career, but no one can deny that he has helped change the fortunes of the Panthers. He helped lead the team to their first Super Bowl appearance in over a decade during the 2015 season. His partnership with head coach Ron Riviera has resulted in a spate of playoff appearances that have unfortunately been unfruitful, but is still more than what the team was achieving before the duo arrived.

Overall, we wouldn’t be too quick to back the team to win the Super Bowl this season. Their preseason performance hasn’t been all to impressive, and the team hasn’t made enough changes to look like a real contender to win. That said, anything can happen, which is why we recommend that bettors stick it out for a few games before placing that future (unless they don’t mind losing money.)

The Carolina Panthers is a fairly new National Football Conference team, having been formed in 1993 and officially joining the league in 1995. Although the team started out pretty well, achieving an NFC Championship appearance in their second season, they soon fell by the wayside and became a respective punching bag for the division they competed in (first, the NFC West and then the NFC South).

After acquiring Newton, the team made it to the playoffs three years in a row, making it to the Super Bowl in the 2015 season, which resulted in another loss. The team has struggled to get back to this level in the years since, but many fans are hopeful that this is just an intermission before they break through and win the Vince Lombardi trophy. 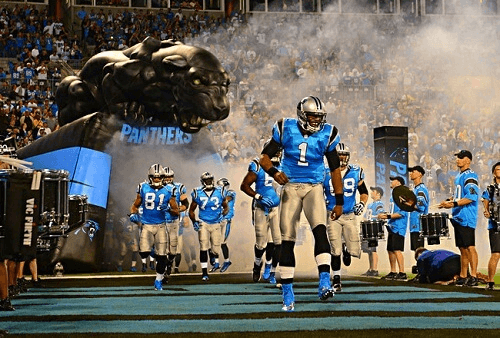 Here are some interesting facts and stats about the Carolina Panthers that US bettors may find helpful in making more accurate wagers on the team: