There doesn’t ever seem like there was a time that Cincinnati Bengals betting was profitable for United States gamblers. The team is one of eight within the National Football League (NFL) to make it to a Super Bowl and never lift the Vince Lombardi trophy. In addition to this, the Bengals last won a playoff game in 1990. At least, betting on the team to win the American Football conference (AFC) North division seems somewhat feasible with their last victory coming in 2015.

If US bettors still feel like betting on this unlucky NFL team despite their unfortunate stats, they should make sure to read on down below. In our ultimate Cincinnati Bengals betting guide, we have a look at the team’s likelihood of winning the Super Bowl this season as well as their overall performance history. We also provide a list of the best online gambling sites to bet on the Bengals. So, read on and find out why your Cincinnati Bengals future bet plans may be a bad idea.

Bet on the Cincinnati Bengals Here

Would you like to bet on the Cincinnati Bengals? Have a look at the odds on offer at the sportsbooks listed here. You are guaranteed to find a good deal!

What You’ll Find In Our Cincinnati Bengals Guide

US sports betting sites have not favoured the Bengals to win the Super Bowl in any way. With the team looking much like it did last year, their first-round draft pick injured and Andy Dalton lacking quality receivers, it seems that the team is set to see a repeat of last year’s 6-10 regular season performance.

The Bengals are hoping that hiring Zac Taylor as coach will lead to wins in the future. As the former quarterback coach of the Los Angeles Rams, there is some confidence that he will do well, but it is plain to see that the Bengals offense isn’t quite that of the Rams.

Overall, we wouldn’t recommend making a future on the team, but that said US bettors can still place wagers on the NFL team if they really wish to do so. We just recommend placing moneylines, spreads, props and totals on regular season games you seem confident in.

The Cincinnati Bengals were founded in 1966 by former Cleveland Browns head coach and owner Paul Brown. The team was initially a part of the American Football League (AFL), which later merged with the NFL in 1970. The Bengals, along with other former AFL teams, were assigned to the AFC after the merger.

The team originally competed in the AFC Central with the Jacksonville Jaguars, Pittsburgh Steelers, Tennessee Titans and Cleveland Browns. But after the league’s 2002 restructuring, the division was renamed the AFC North and the Jaguars moved out.

The team has won their division a total of nine times, with the most recent being in 2015 and the AFC Conference Championship twice (1981 and 1988). However, they have never won a Super Bowl title.

Although they’ve made it to the NFL playoffs in recent years, they have not won a playoff game since 1990, making this the longest playoff drought in the NFL. In fact, if their current stats are anything to go by, the Cincinnati Bengals aren’t a team to wager on during the NFL postseason at all.

With the Cincinnati Bengals and the Cleveland Browns history of poor performances, it doesn’t seem like the state of Ohio will be in the Super Bowl any time soon. 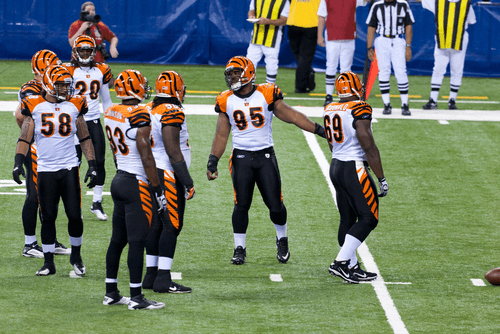 Here are some interesting facts about the Cincinnati Bengals that may help US gamblers make better bets on the team: