Indianapolis Colts betting trends have been somewhat of a rollercoaster in recent years. First, Peyton Manning gave the National Football League (NFL) team great hopes of winning multiple Super Bowl titles, and was able to lead the team to a few AFC Championships. Then, he was traded and Andrew Luck was put in the hot and has yet to lead the team to a Super Bowl victory. Despite some rocky recent seasons, the Colts are still considered one of the strongest teams in the NFL.

Are you looking to bet on some Indianapolis Colts games? Well, make sure you keep on reading then as we have got an ace team guide down below. In it, we have a look at the team’s odds to win the Super Bowl, the team’s performance history and some interesting facts about the side. So, read on and start making better bets on the Colts at the best online gambling sites today!

Bet on the Indianapolis Colts Here

For your convenience, we have listed some of the best NFL betting sites down here. US bettors are sure to find the best odds on Colts games at the featured sportsbooks.

What You’ll Find In Our Indianapolis Colts Guide

The Colts didn’t have the greatest season last year, but it was a fair improvement form the year preceding that, and the team did make the playoffs. Overall, sports betting sites have given the team fair odds of winning the Super Bowl this year. In fact, they make it into the top third of the teams of the league.

Although Andrew Luck may seem injury prone, if he does make it through and play this season in top form, the Colts could really stand a good chance of winning the Super Bowl. This is especially true when one takes into account that the team’s defensive rookies have also been playing very well, meaning that the team could possibly have an incredible year on both fronts.

We wouldn’t fault anyone who chooses to place a future bet on the Colts. The team seems as if it is rising and if Luck is at top form, the team is sure to do well this season. That said, we would wait a bit before placing it. US bettors should make sure that they are betting on an NFL team led by Luck and not by Jacoby Brissett or any other replacement.

The Indianapolis Colts were formed in 1953 in Baltimore, Maryland, where they competed as the Baltimore Colts. They were an expansion team added to the National Football League and played their first season in the same year as formation.

In 1970, the Colts were made to join the American Football Conference as part of the 1970 NFL-AFL merger. The team would go on to dominate in the league that year, even going on to win their first Super Bowl title.

In 1983, the team moved to Indianapolis, where they have played ever since. The team struggled for the first 13 years they were located in Indianapolis and only really saw a few winning seasons. Struggles came to an end when the team drafted Peyton Manning who would lead the team to two Super Bowl appearances, including one victory in 2006.

After Manning’s release in 2012, the team has seen varying season results with current starting quarterback Andrew Luck, making it to the AFC Championship game once in 2014. Fans are hoping for a breakthrough soon. 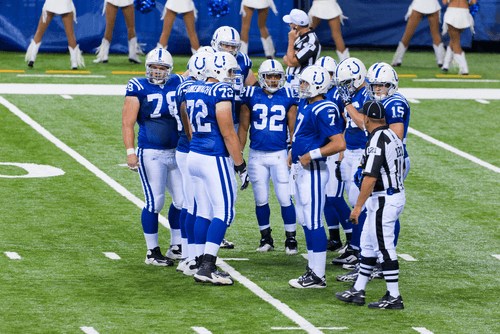 Before you lock in that future on the Indianapolis Colts, you may want to have a look at the following team statistics: