Jacksonville Jaguars betting has not really been the most successful form of National Football League (NFL) betting in Florida. Since joining the league in 1995, the team has only won three division championships and made slightly more than a handful of playoff appearances. The team has yet to taste Super Bowl glory, and seems to trying hard to do so sometime soon, despite inconsistent performances. With former Super Bowl MVP Nick Foles recently being named the team’s starting quarterback, many are wondering whether the team will be able to make good on an attempt soon.

If you want to bet on the Jacksonville Jaguars but you don’t know where to start, this guide is for you. You will find out more about the team and the best online gambling sites to place NFL bets in the United States. So, read on and find out more about betting on Florida’s third-most successful football team.

Bet on the Jacksonville Jaguars Here

Looking for the best odds on the Jaguars this year? Well, look no further than the sportsbooks listed down below. Each is sure to provide bettors with a fine list of enticing betting lines.

What You’ll Find In Our Jacksonville Jaguars Guide

While sportsbooks aren’t predicting that the Jacksonville Jaguars will come last in the league this year, they also aren’t suggesting that the team has a real chance of winning the league. The team has just signed former Super Bowl MVP Nick Foles and named him starting quarterback. It is unclear at this moment how Foles will integrate with the team, which has made bookies sceptical.

Overall, the team saw a pretty average draft, with some pretty average players being added to the roster. This too hasn’t made bookies all to hopeful for a Jacksonville victory this year. Our experts wouldn’t recommend placing a serious future on the team due to lack of exciting news coming out of training sessions. That said, if a sports betting site allow you to bet on which Florida team will perform best this year, the Jaguars may seem like a pretty solid option. 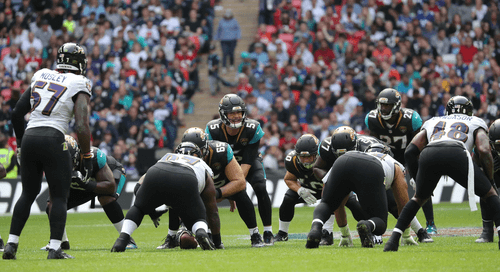 The Jacksonville Jaguars were formed in 1993 and played their first season in the NFL in 1995. The team was assigned to the American Football Conference Central division, alongside the Tennessee Oilers, Pittsburgh Steelers, Baltimore Ravens and Cincinnati Bengals. Former New York Giants Wide Receivers Coach Tom Coughlin was named as head coach.

Coughlin would go on to lead the team to their first two AFC Championship appearances in 1996 and 1999, losing on both occasions. However, after a spate of bad results in the latter half of his career with the team, Jaguars owner Wayne Weaver fired Coughlin, who would later go on to win two Super Bowl titles as the head coach of the New York Giants.

In 2002, the Jacksonville Jaguars was reassigned to the AFC South division alongside the Tennessee Titans, Indianapolis Colts and Houston Texans, following the 2002 NFL realignment. The new division assignment proved to be very hard on the Jaguars, especially after the Indianapolis Colts grew to be such a force in the league. In fact, since joining the division, the team has only made it to the playoffs three times.

The team hasn’t really had the best luck in recent years. The only success they have really seen came in the 2017 season, where they made it all the way to the AFC Championship game only to be narrowly defeated by the New England Patriots. Fans are hoping that their first Super Bowl win will come soon, but remain realistic too.

If you are looking at betting on the Jacksonville Jaguars, you may want to have a look at the following statistics before you confirm that wager: