There has been a recent spark of interest in Kansas City Chiefs betting in recent years. After many years of struggling, it seems that the Chiefs have finally managed to build a squad that all the US bettors based in Missouri can get behind without feeling that their wagers will be throwing money away at US online gambling sites. Following some absolute stellar performances that many feel may soon result in a big Super Bowl win in coming seasons. Will this be the year that the Kansas City Chiefs prove to be victorious?

If you are interested in betting on the Kansas City Chiefs this season, you may find it worthwhile to go through our detailed betting guide down below. There we have a look at the Chiefs’ National Football League (NFL) performance history, their odds to win the Super Bowl this season, as well as some interesting overall facts. So, read on and find out whether the Chiefs really are the season to be betting on this season.

If you’re on the hunt for some good Kansas City Chiefs odds, we recommend having a good look at any of the sports betting sites listed down below. There US bettors are sure to find both good lines and odds.

What You’ll Find In Our Kansas City Chiefs Guide

Without a doubt, the Kansas City Chiefs are one of the most favored teams to win the Super Bowl this season. The team has won the AFC West division title for the last three years in a row, and made it all the way to the AFC Championship game in 2018 before being knocked out by eventual winners the New England Patriots.

Patrick Mahomes has also proved to be a fine addition to the team. After a rookie year that saw limited play time in 2017, Mahomes was named starter in 2018 and the season really was one for the record books. His performance resulted in him being named the league NFL MVP for 2018. If Mahomes is able to keep up the fine form, there is no doubt that the Kansas City Chiefs are on the road to doing great things.

We wouldn’t fault any bettors who would want to get in early on betting on the Chiefs. The team has been doing well these last few years, and it really seems as if their form is going to culminate in a Super Bowl win soon. Futures are never safe bets, but the Chiefs do definitely seem like a safer betting option.

The Kansas City Chiefs were formed in 1960 as an AFL charter team, but were originally known as the Dallas Texans for the first two years of their existence. After the formation of the Dallas Cowboys in 1962, the team made the move to Missouri.

The Chiefs were an extremely successful team during the early years of their existence. They dominated the AFL for much of the 1960s, picking up three AFL Championship titles between 1962 and 1969. The Chiefs also won their first and only Super Bowl title during the year of the NFL-AFL merger.

As all of the other AFL teams, the Chiefs were assigned to the American Football Conference during the merger, more specifically the AFC West. The team struggled to assert any true dominance within the division when it was first formed. In fact, for much of the 1970s and 1980s, the team was pretty much the punching bag of the division. As a result of this, the Chiefs only made two playoff appearances between 1970 and 1990.

However, this changed during the early 90s, when the team actually started being successful. With acquisition of Joe Montana in 1993, the team was able to make their first ever AFC Conference Championship appearance, which unfortunately resulted in a loss. Following the 1995 season, the team once again returned to poor form.

For much of the 2000s, the team struggled to make any real impact on the league, only mustering sporadic playoff appearances. This has changed in recent years though as the team has been a force to be reckoned with since about 2013. With the addition of Patrick Mahomes to the squad, many US bettors believe that the team will soon win a Super Bowl title. 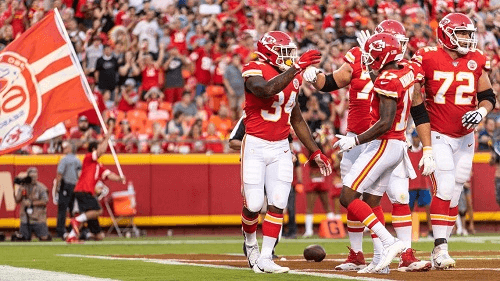 If you’re planning on betting on the Kansas City Chiefs this season, you may want to keep the following facts and stats in mind: