Los Angeles Chargers betting is fairly new, but not all that popular in the Southland. Formerly known as the San Diego Chargers, the team moved cities in 2016, but has failed to find a big support base in their new home despite staying in the same state. In addition to this, the team isn’t really known to be all that lucky as they have pretty much gone half century of without winning the Super Bowl. Are there any real good reasons to consider placing a Chargers future bet this year?

Below we have a good look at the NFL side in our comprehensive team betting guide. Not only do we provide bettors with the best online gambling sites in the United States, but we also have a look at the team’s likelihood of winning the Super Bowl this season as well as their overall performance history. So, read on and find out more about betting on California’s seemingly least favorite football team.

Place your bets on the Los Angeles Chargers at absolutely astounding odds at any one of the sports betting sites listed down below! US bettors are sure to find loads of amazing lines and odds here.

What You’ll Find In Our Los Angeles Chargers Guide

Bookies have pegged the Los Angeles Chargers to have a good NFL 2019 season, following a good 2018 season that saw them go 12-4 in the regular season and make it to the Divisional playoffs where they were knocked out by eventual Super Bowl champions, the New England Patriots.

Some did feel that the Chargers were lucky to have the season they had last year, but it remains to be seen whether they will be able to keep the good form up. Overall, many bookies have put the team up there with the Cleveland Browns as potential surprise Super Bowl candidates just waiting to lift the trophy.

While there’s clearly loads of talent on the team, we recommend that US bettors wait until the season has begun before placing any wagers on the Chargers. We believe that the first few games may prove crucial in determining whether or not they are a team to bet on this year.

The Los Angeles Chargers were formed in 1960 as one of the charter teams of the American Football League (AFL). One year after their formation, they moved to San Diego. The team was very competitive in their early years, picking up one AFL Championship title in 1963. However, this changed when the league merged with NFL in 1970 and the team was assigned to the American Football Conference West division alongside the Kansas City Chiefs, Denver Broncos and Kansas City Chiefs.

Following the retirement of Fouts, the team saw sporadic moments of success throughout the 1990s, but would struggle to retain any good form until Philip Rivers joined the team in 2004. Rivers brought new life to the team and they saw some successful years in the late 2000s, but hit another slump near the end of the decade.

In 2016, the team moved to Los Angeles, and was not met very well in their new city. Many ardent fans are hoping that a Super Bowl win may change this but it remains to be seen whether the Chargers will ever get that far. 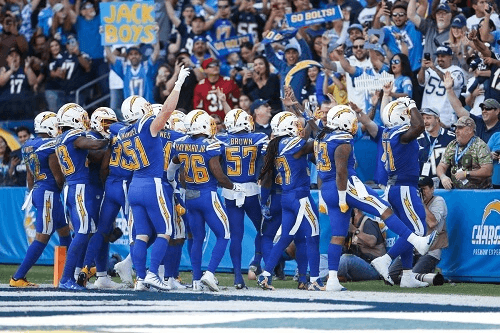 Before you place any bets on the Chargers, be sure to have a good look at the stats listed below. We aren’t saying you’ll change your mind, but they aren’t pretty: