National Football Conference betting (or NFC betting) makes up pretty much half of all United States betting on the National Football League (NFL). Of the two conferences, the NFC is considered to be more competitive. In a 15-year period, 12 different NFC teams have made it to the Super Bowl compared to the five teams that have made it in the American Football Conference. In fact, the Seattle Seahawks are pretty much the only NFC team to have had back-to-back appearances in the last 20 years. All this means is that odds are high on these teams, and the payouts massive.

If you would like to learn more about NFC betting, make sure to keep reading. Below we have a look at all US bettors need to know about betting on the NFC Championship. This includes a look at popular betting markets and the current odds on teams to win the NFC Championship. We also provide some good betting tips to help you make better NFL bets. So, read on and get clued up on NFC betting.

Looking for some good NFC odds? Well, look no further! The sportsbooks listed below have got lines with fantastic odds that will meet all your NFL betting needs. It doesn’t matter whether you want to make a moneyline bet on a season game or a future bet on the Super Bowl; they have got it all!

What You’ll Find In Our National Football Conference Guide

Betting lines on the NFC Championship game are pretty much the same as those seen on any other match played throughout the season. As explained on our AFC page, championship games really just open the door for new prop bets of both the standard and exotic nature. If you are unsure of how to bet on the NFL in general, don’t stress, we have listed some of the most popular betting options available to you down below:

While we won’t provide any team specific NFC betting tips here (those you can find on our dedicated team pages), we have got some advice to share that may help US bettors make successful wagers on a regular basis. So, if you’re looking to place a bet on the NFC Championship (or, any other NFC game for that matter), make sure you consider the following: 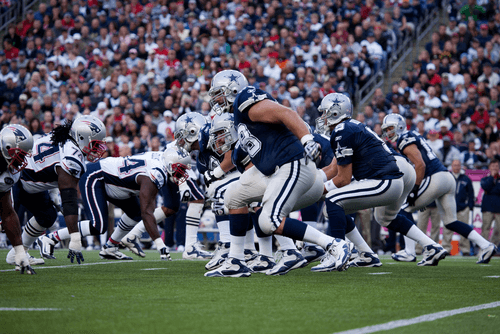 Every good US football bettor should be looking to place a future bet on the NFC Championship. While it may be a bit early, and NFC betting odds are likely to change, this is how sportsbooks are weighing each team’s chances of winning the Conference this year. Last year’s champions, the Los Angeles Rams, have been tipped by many to retain the title this year.

Three additional teams have joined the NFC since 1970. These include the Seattle Seahawks, Tampa Bay Buccaneers and the Carolina Panthers. A new team has not been added to the conference since 1995, when the Panthers joined.

Overall, teams in the NFC seem to display more parity than their AFC counterparts. As stated earlier, the conference has seen a load of different teams make it to the final as opposed to just five. In addition to this, the only team that has never made it to the Super Bowl is the Detroit Lions.