Many National Football League (NFL) gamblers would argue that NFC North betting is among the most popular in the entire sporting league. This is because the teams that encompass the division hold some of the most famous rivalries in the history of sports as a whole. The Chicago Bears, Detroit Lions, Green Bay Packers and Minnesota Vikings are all fierce competitors with strong core fanbases. Each team is located in a state based in the American Mid-West making it easy for fans to travel to games. Placing a wager on a game involving one of these teams makes an already electrifying game just that much more exciting.

If you would like to bet on the NFC North at top online gambling websites, make sure to keep on reading down below as we have crafted a guide on the division like no other. Below we detail each team’s odds to win the division and Super Bowl this year as well as go into the history of the division as a whole. So, read on and start making better NFL bets.

Bet on the NFC North Here

Looking for the best online sports betting sites for all your NFC North-related bets? Well, these top NFL betting sites are sure to help you out with all your needs. Don’t forget to claim your bonus when you sign up!

What You’ll Find In Our NFC North Guide

All of the teams in the NFL‘s NFC North have a massive fanbase. However, that said, a good fanbase does not always translate in a successful team. Below we have a look at each team’s NFC North odds for this coming season, as well as whether they are likely to make it to the Super Bowl this year:

History of the NFC North

The National Football Conference North  division was originally called the NFC Central after the 1970 NFL-AFL merger. When formed, the division consisted of all current members, but they were later joined by the Tampa Bay Buccaneers in 1977. With most of the teams being located geographically near each other, and many having played against each other in the same division since 1933, huge rivalries between the teams emerged over the years.

The 1970s saw the division largely dominated by the Minnesota Vikings who failed to translate this form into a Super Bowl win (a feat they haven’t managed to this day.) Although there was brief period in which the Tampa Bay Buccaneers, Detroit Lions and Green Bay Packers were able to register some division wins, this was followed by a period of domination by the Chicago Bears. It all eventually culminated in their Super Bowl in 1985.

The 1990s saw the division become somewhat less predictable with each team registering some division wins and the Green Bay Packers picking up a Super Bowl win during the 1996 season.

During the 2002 NFL realignment, the division was renamed the NFC North and the Tampa Bay Buccaneers were moved to the NFC South. Since then, more often than not, the Green Bay Packers have dominated the division, even picking up another Super Bowl win in 2010.

Although the division is considered one of the most competitive in the league, together all of the teams within the league have only amassed a combined total of five Super Bowl wins. Many bettors think that a good period for the Chicago Bears is on the horizon, even though it’s the Minnesota Vikings and Green Bay Packers who have made it to NFC Conference Championship games in recent years, but this remains to be seen. 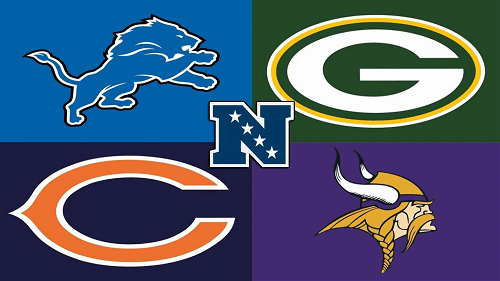 Before placing a bet on any of the teams in the NFC North, make sure to have a good look at the facts and stats listed here: