Although the NFC South is relatively new, this does not mean that it lacks interesting NFL betting opportunities. The division is made up of four very competitive teams in the form of the Atlanta Falcons, Carolina Panthers, New Orleans Saints and Tampa Bay Buccaneers. Each team has made it to an NFC Conference Championship and Super Bowl game since the formation of the division in 2002, making it the teams very attractive in the eyes of US bettors. It is just important to keep a keen watch on which teams are actually making a run at the Super Bowl this season.

If you would like to learn more about betting on the teams in the NFC South, we encourage you to stick around. Not only do we provide a load of great NFL online gambling real money sites down below, but we also take a good look at the teams in the division, and some interesting facts about them, among other things. So, read on and get educated on your NFC South wagers.

Bet on the NFC South Here

Looking to bet on the teams in the NFC South? Make sure that you have a good look at the US sports betting sites down below. Each has got a load of great betting lines at some very competitive odds. So, what are you waiting for?

What You’ll Find In Our NFC South Guide

While all of the teams in the NFL‘s NFC South have seen some relative success in the past, there hasn’t really been a period where every sing team has been competitive at the same time. Below we have a good look at the teams in the NFC South and their odds of winning the division this year:

The National Football Conference South was created in 2002, during the NFL realignment. It is one of the newest divisions in the league. The division famously helped fix some of the biggest geographical inaccurate in the league, grouping the Atlanta Falcons, Carolina Panthers, New Orleans Saints and Tampa Bay Buccaneers together.

When the division was created, the team’s that formed it were considered some of the unluckiest in the league, with only the Atlanta Falcons having registered a previous Super Bowl appearance. This all changed as the Tampa Bay Buccaneers proceeded to win the Super Bowl in the season of the division’s formation. Following that the Carolina Panthers would go on to make it to the Super Bowl the very next season.

Most years since then have proven to be relatively successful for teams in the division, with the New Orleans Saints also picking up a Super Bowl victory. If the division history has anything to say, it is that there is a good chance of an NFC South team making it to the NFC Championship, but their success at this stage is varied. 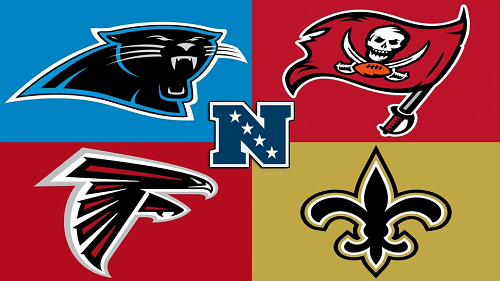 Before you place a bet on any of the teams in the NFC South, have a look at some of the facts land stats listed down below: