The NFC West has risen to become one of the most competitive divisions in the National Football League (NFL), and is filled with prime betting opportunities for avid US bettors. It is comprised of the Los Angeles Rams, Seattle Seahawks, San Francisco 49ers and Arizona Cardinals. Each of these teams have made it to the Super Bowl at least once since the 2002 division re-alignment, even if not all of them have been successful in lifting the Vince Lombardi trophy. With the teams often proving their mettle, real online gambling sites in the USA often provide at least one of teams with competitive odds to go all the way.

If you would like to learn more about betting on the NFC West, make sure to have a good look at our guide below. Not only do we provide US bettors with a list of the best sports betting sites, but we also have a look at the odds of each team in the NFC West to win both their division and the Super Bowl. Gamblers can also expect to find some interesting facts about the teams that make up the division. So, read on and make better bets on the teams in this division.

Bet on the NFC West Here

Looking to place a bet on any of the teams in this competitive division? Well, have a look at the popular NFL betting sites below! They are sure to provide you with profitable odds and exciting betting lines.

What You’ll Find In Our Guide

The teams in the NFL‘s NFC West seem to take turns in dominating both the division and the league. If you are looking for some tips on who may be edged to take the division this year. We have got detailed breakdowns for each team below:


History of the Division

The National Football Conference West was initially formed in 1967, but was known under a different name – NFC Coastal. Back then, the division consist of four team on the opposite coasts of the country: the Atlanta Falcons, Baltimore Colts, the Los Angeles Rams and the San Francisco 49ers. The division was probably one of the most geographically inaccurate and would become even more so in future.

After the 1970 NFL-AFL merger, the division was renamed the NFC West, and some team changes were made. The Baltimore Colts were moved to the AFC East and the New Orleans Saints were moved in. The Seattle Seahawks joined the division for a year in 1976 before moving to the AFC West. The Carolina Panthers would join the division in 1995 and in that year the Rams also moved to St. Louis.

During the 2002 re-alignment, the entire division was changed. The St. Louis Rams, Arizona Cardinals, Seattle Seahawks and San Francisco 49ers were grouped together to form a more geographically accurate division that would only become more so when the Rams moved back to Los Angeles. 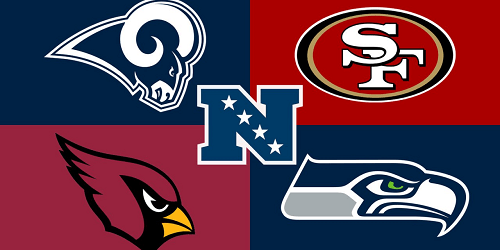 Before you place a good, old wager on the NFC West, make sure to have a good look at some of the facts and stats listed down below: