New York Giants betting has taken a sharp decline since the team last won a National Football League (NFL) Super Bowl title in 2012. Since then, the team has made it top the playoffs once and have failed to take the NFC East division. That said, the team has never really been one that you can count out, especially when you look at their recent Cinderella story Super Bowl wins in 2007 and 2012. The team currently holds the record for worst season total to win the Super Bowl with 9-7 in 2012, and 10-6 in 2008 before that.

Despite their recent spate of very bad seasons, if United States bettors are interested in betting on this famously paying underdog team, make sure to stick around. Below we have a look at the NY Giants odds of winning NFC East and Super Bowl, along with their overall performance history. We also provide a list of the top NFL online gambling sites for US gamblers.

If you would like to bet on the New York Giants this season, we recommend signing up at one of the US sports betting sites listed down below. Not only do have the best odds and lines, but they have some pretty handsome bonuses too!

What You’ll Find In Our New York Giants Guide

The NFL’s New York Giants are coming off two absolutely terrible losing seasons, which saw the team go 3-13 and 5-11 consecutively. In addition, there is a bit of a division over whether Daniel Jones should be given the role of starting quarterback or whether the team should stick with veteran Eli Manning – one of the architects behind the team’s two Cinderella stories.

The fact that the team isn’t performing well is pretty clear; what isn’t though is why. Some bettors believe that this may stem from Manning holding on to the starting quarterback position for too long whereas others believe that it may be a bit of a management issue. After all, the Giants have also had four different coaches in since the retirement of Tom Coughlin in 2016.

The Giants are a bit of a tough team to get a handle on. As previously mentioned, the team has won against all odds with a mediocre team – their win over a 16-0 New England Patriots in Super Bowl XLII is one such example of that, and this makes them a difficult team to predict outcomes for.

Most bookies aren’t betting on a Giants Super Bowl victory this season, but that said, who know what could happen? Manning fans believe that the quarterback will lead the team to one more Super Bowl title before retiring, whereas Jones fans believe that he is the future face of the franchise. We believe that it may be best to wait two or three weeks before placing any sort of future bet on the team. 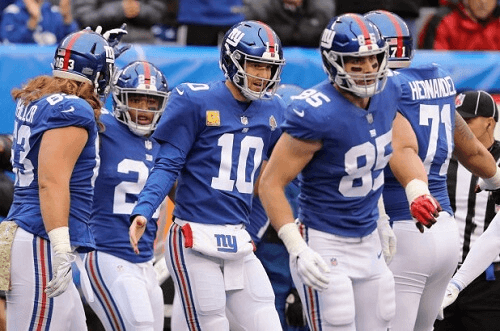 Formed in 1925, the New York Giants is one of the oldest football teams in the NFL’s National Football Conference and has always been in the East division of the league in some form. The team’s early years were racked with great performances as the league began to take formation, which culminated in three NFL Championship titles between 1927 and 1938. In this period, the team also set a record for fewest points given up per game at 7.5, which still stands today.

The Giants didn’t experience success again until the 1956 season, which saw the team win their fourth NFL Championship title. They made it to Championship game five times over the next seven years after this, with the Championship game against the Baltimore Colts being called “the greatest game ever played”.

Following their 1963 season NFL Championship appearance, the team would enter a near twenty-year playoff drought. In 1981, star linebacker Lawrence Taylor was drafted and the team made the playoffs. With Taylor in the team and legendary coach Bill Parcells in charge, the Giants won two Super Bowl titles, in the 1986 and 1990 seasons. (Future Super Bowl winning head coaches Tom Coughlin and Bill Belichick formed part of the coaching staff too.)

Following their 1990 win, the team would struggle to make the playoffs until the 1999-2000 season, which culminated in their third Super Bowl appearance, which ended in defeat. The team would not really taste all that much success until Eli Manning was drafted in 2004.

With Manning at quarterback and Coughlin at head coach, the team won two Super Bowl titles in the 2007 and 2011 seasons, beating the heavily-favored New England Patriots in the final both times. However, since then, the team has not done much, with fans hoping this will change soon.

Before placing a bet on the New York Giants, make sure that you have taken note of the below listed facts about the team.