San Francisco 49ers betting has got a good history but has been all over the place in recent years. Although the team made it to three consecutive NFC Championship games in the early 2010s, they have been one of the worst performing teams in the NFL since then. Not only have they struggled to make it to the playoffs, but they have also not been able to post winning seasons. In addition to this, since the departure of Jim Harbaugh, the team has been through a string of different head coaches who have been unable to turn the team into a winning side.

Despite all this, if you would still like to bet on the San Francisco 49ers, we have created a guide to doing so down below. We go through the 49ers odds to win NFC West and Super Bowl as well as have a good look at the team’s overall performance history. We also provide a list of online gambling sites with the best odds on the San Francisco 49ers. So, what are you waiting for? Read on and begin betting today!

Looking to bet on the San Francisco 49ers? Well, look no further than the sports betting sites listed down below. Each is set to provide you with some amazing odds on all sorts of betting lines.

What You’ll Find In Our San Francisco 49ers Guide

As previously mentioned, the San Francisco 49ers have not been in a good space in the NFL in recent years. Since the departure of former head coach Jim Harbaugh, the team has not posted a winning season, with the most recent ending with a 4-12 record. With current coach Kyle Shanahan’s overall record with the team being less than stellar, it is unsurprising that sportsbooks have not pegged the team to win this year.

Shanahan has made some shock calls with the team’s roster in recent weeks, which has led many to believe that this season will either go really well for the team or go belly up. With no firm starter at quarterback, it’s difficult to say that the team is going to be able to pull off anything good this year, but who knows; they may just surprise the world.

Overall, the 49ers are clearly still a team locked in a rebuilding phase. This could be their year that they breakout and show that they are emerging from the stasis that they’ve been in for the past five years, but we wouldn’t count on it. Place an early future on the team to win either the NFC West or the Super Bowl at your own risk. 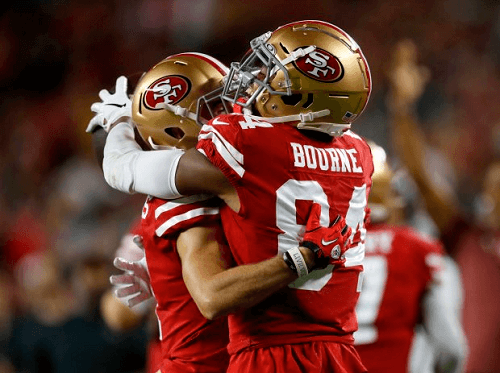 The San Francisco 49ers were formed in 1946 and joined the NFL during the 1950 season. Upon entering the league, the team struggled quite a bit to adapt, making the playoffs only once in their first 19 seasons.

Following the NFL-AFL merger in 1970, the team was assigned to the National Football Conference with many of the other NFL teams. In their first two years following the merger, the team actually played quite well, making it to two NFC Championship games back-to-back, in addition to winning their division three years in a row.

However, at the end of the 1972 season, the team would take nine years to before they would have any real impact on the league again. The real turning point came in 1979 when the team drafted Joe Montana and named Bill Walsh as head coach.

Although it would take Montana two years to work his way to the team’s starting quarterback position, he would lead the team to their first ever Super Bowl title in that year. And, so began the period of 49ers’ dominance.

Over the next decade, the Montana and Walsh duo would lead the team to three Super Bowl titles and four NFC Championship appearances. After Walsh’s retirement in 1988, his defensive coordinator George Seifert would take the helm and lead the team to another Super Bowl win with Montana in 1989, along with two additional NFC Championship appearances.

In 1992, Steve Young replaced the ageing Montana as starting quarterback and led the team to their fifth Super Bowl title in the 1994 season. Although the team would continue to make it to the playoffs and even NFC Championship in the seasons preceding that, they would not appear in another Super Bowl for some time.

Following the turn of the decade, the team struggled to make an impact on the league, making the playoffs only twice between 2000 and 2010. After the appointment of Jim Harbaugh in 2011, the team seemed to be returning to its former glory. Between 2011 and 2013, they appeared in the NFC Championship game three years in a row, winning in 2012 but failing to translate this victory into another Super Bowl win.

Since Harbaugh’s departure, the team has failed to post any winning seasons, and has gone through three different coaches. It doesn’t seem as if the team will be doing well anytime soon.

Check Out Our Other NFC West Guides:

Before placing your next bet on the San Francisco 49ersm, you may want to have a good look at some of the facts listed down below. You never know; you may change your mind about betting on the team.