Washington Redskins betting has not been at all fruitful in recent decades. Aside from a couple of NFC East division wins, this famous NFL team hasn’t really showed any potential of winning a major title in recent years. Since their 1991 Super Bowl winning season, the team has had a flurry of hopeful stars come and go, leading the team to nothing other than disappointment. That said, this has not stopped fans and bettors hoping that this may one day change soon if the team ever comes together.

If you would like to learn more about Washington Redskins betting odds, then make sure to stick around. We have created the ultimate guide to betting on this famous NFL team. Some of the areas we focus on include the Washington Redskins’ Super Bowl odds, their recent performance history and more. We also provide a list of the best online gambling sites in the United States with the top Redskins betting lines. So, read on and find out more about betting on this great team.

Bet on the Washington Redskins Here in 2021

If you’re looking for the best Washington Redskins betting odds in the United States, you need to make sure that you visit any one of the top sports betting sites down below. They have got a wide variety of odds and betting lines.

What You’ll Find In Our Washington Redskins Guide

The Washington Redskins have not made it to the NFL playoffs since the 2015 season, and have not won a Super Bowl title since 1991. They have struggled in the NFC East over the last decade, and with the Philadelphia Eagles and Dallas Cowboys performing pretty well, bookies have not pegged them to touch any honors this season.

In addition to their rather terrible performances in recent seasons, the Redskins have also been having trouble finding a suitable starting quarterback. While the selection of Robert Griffin III in 2012 brought the team much hope, an injury suffered in the 2014 season basically resulted in a quarterback void that has not been adequately filled. While Kirk Cousins seemed to play well, he was later shipped off to Minnesota, and has seemingly been swapped out with Case Keenum.

It remains to be seen whether the Redskins will be able to perform against all odds. Many fans are hoping that they’ll be able to get their offensive and defensive lines sorted out, but it really doesn’t seem as if this is going to happen any time soon. Overall, we wouldn’t take any Washington odds to win NFC East, and would definitely not pay any mind to Super Bowl odds concerning the team. We really feel that placing such bets would be throwing money into a pit. 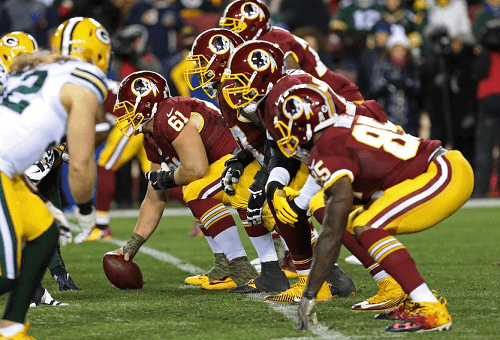 The Washington Redskins were formed in 1932, but were originally known as the Boston Braves rebranding to the Redskins a year later, and moving to Washington in 1937. The team is one of the oldest active teams in the NFL. The team’s first two decades of existence was dominated by great performances which saw them pick up two NFL Championships, in addition to making it to the final four other occasions.

Following their 1945 NFL Championship appearance, the team suffered a slump that pretty much lasted until the 1970 NFL-AFL merger. During the merger, the Redskins were assigned to the National Football Conference with most other NFL teams. The team finally started to make it to the playoffs again in 1971 and would win their first ever Super Bowl title in 1972 with legendary running back Larry Brown forming part of the team, and George Allen coaching.

While under the Allen, the team would make it to playoffs a few more times, but would never win another Super Bowl. Following 1976, it would be six years before they made it to the playoffs again. In 1981, Joe Gibbs was hired and the team would begin one of the most diverse football dynasties the league has ever seen.

Over the next decade, the team would make it to the Super Bowl four times, winning on three occasions with different quarterbacks. (This all also happened during a period that was known for NFC East dominance as the Dallas Cowboys and New York Giants picked up some wins too.)

Following Gibbs’ retirement in 1992, the Redskins have struggled to get back into winning form. The team has made it to the playoffs a handful of times, but have never made it past the divisional round. Fans and bettors are hoping that the team may one day return to winning form.

Before you have a good look at any Washington Redskins future betting lines, make sure to have a look at the below listed facts: