Arizona Coyotes odds have not been at all good for the last few years. The team has experienced a long playoff absence and has never been lucky enough to win a Stanley Cup title even when they were based in Winnipeg. It seems that the tides are changing though as the team seems to be having a really good season with Darcy Kuemper as starting goaltender. So much so that it may actually even be worth betting on the team this season!

If you would like to find out more about betting on the Arizona Coyotes, be sure to stick around. Below we have a good look at the Yotes odds to win the Stanley Cup and their overall performance history. We also provide US bettors with the best list of online gambling sites to bet on the Arizona Coyotes. So, read on and find out all you need to know about betting on this popular hockey team.

What You’ll Find In Our Arizona Coyotes Guide

While the history of the Arizona Coyotes should tell all US bettors that it is a bad idea to wager on them, their stellar performance this NHL season suggests otherwise. The team is currently on a hot streak that suggests that they have a good chance of winning their Division Championship and ending on top of the Western Conference standings.

That said, we’d recommend waiting before placing a bet on the Coyotes to win the Stanley Cup. We think that enough of the season has passed to bet on them to make the playoffs, but their performance en route to the cup should be a better determiner of whether it is a good idea to bet on a victory. If goaltender Darcy Kuemper is able to stay in fine form, the team is in for a good go at getting their first big win.

The Arizona Coyotes were formed in 1972 as the Winnipeg Jets (which are entirely unrelated to the current Winnipeg Jets.) The team competed in Winnipeg for 18 years, seeing little to no success in the NHL. Poor performance led to poor support from fans, which is eventually what helped lead to a relocation.

In 1996, the Winnipeg Jets moved to Arizona and rebranded themselves as the Phoenix Coyotes. Upon the move, the team initially did see some success, making it to the playoffs in four consecutive seasons. Following this, the team struggles to make it to postseason began. The team would miss the playoffs in six consecutive seasons, only making it again in 2010. And so, began the team’s brief spell of success which resulted in the Yotes one and only ever Western Conference Finals appearance in 2012. This would be the last time the team made the playoffs. 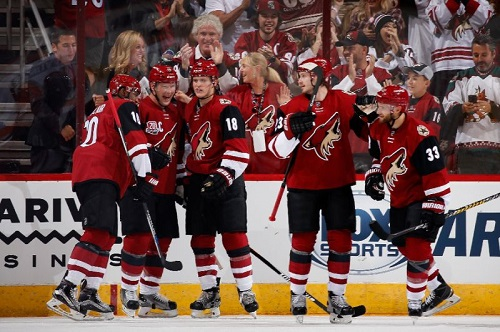 Before placing a bet on the Arizona Coyotes, you may want to have a look at the below team facts and stats: