Calgary Flames odds have been on the up following their division victory in the National Hockey League’s (NHL) 2018-19 season. The team seemingly broke a long period of terrible performances with a good regular season run but did perform badly in the playoffs, falling out in the First Round. They haven’t really been performing as well as they were last season but still have a good chance of making it to the playoffs this season. The team will be looking to add to their tally of Stanley Cup wins.

If you would like to find out more about betting on the Calgary Flames online, make sure to have a look at our dedicated team guide down below. There we have a look at the Flames’ chances of making the Stanley Cup this year, their performance history and some interesting facts to keep in mind when betting on them. So, read on and making money on some Calgary Flames games at the best US gambling sites.

The Calgary Flames have not started off this NHL season as well as they would have liked to. The team is coming off a Pacific Division victory, but a poor overall playoff performance which saw them get knocked out in the First Round by the Colorado Avalanche in a 1-4 thrashing. They are sure to be trying to improve on this performance this year.

While the Flames quite aren’t living up to last year’s form, we don’t think that they are a last cause. We’d say that betting on them to make the playoffs is a fair bet, given their position in the conference at the moment but we’d hold off on a bet on them to win the Stanley Cup until later on in the season. Perhaps, those bets will be a better option when it has been confirmed that the team has made it to the next stage of the season.

The Calgary Flames were formed in 1972 as the Atlanta Flames after a second team was required to balance conferences following the addition of the New York Islanders. The Flames spent eight years in Atlanta, accomplishing very little in the league before being sold after owner Tom Cousins faced financial difficulty in 1980.

Following the team’s relocation in 1980, the team started to perform a lot better. Instead of simply getting knocked out in the first round of the playoffs, the team actually started making it to division semi-finals and finals. This all culminated in their first Stanley Cup appearance in the 1985-86 season, which unfortunately ended in a loss.

Their second attempt at the cup would come in the 1988-89 season, where they also managed to win the President’s Trophy. Although they had lost to the Montreal Canadiens in the previous cup game, they would prove to be better this time around. Following this win, the team would not really accomplish all that much in the playoffs for a very long time. The team even experienced a seven-year absence.

This all came to end in the 2003-04 season, where the team made it all the way to the Stanley Cup final for the first time in nearly 15 years. They would go on to lose against the Tampa Bay Lightning in what proved to be a very close game.

Following the lockout, the team has struggled to get back into winning form, experiencing great difficulty in the first round of the playoffs and even struggling to make it most seasons. 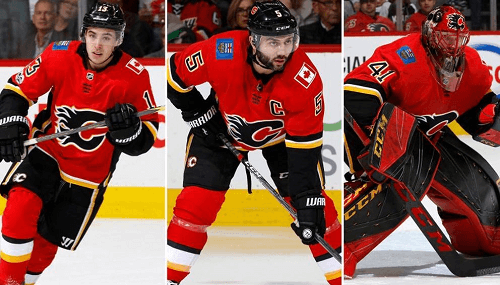 Before you place bets on the Calgary Flames, make sure to have a good look at the following facts and stats: