Detroit Red Wings odds have really dropped in recent years with the team seemingly entering a period of decline. As one of the Original Six and such a great record of making the playoffs, the team may seem like a good bet but they really aren’t. This season, they seem to be potentially competing for last position in the league. It does seem that the next few years will be a period of rebuilding for the Red Wings but who knows? They may very well be capable of turning it around.

If you would like to learn more about betting on the Detroit Red Wings, make sure to stick around. Below we have a good look at the team’s odds of winning the Stanley Cup, their overall performance history and some interesting facts to keep in mind when placing bets. We also list the best online gambling sites to bet on hockey. Start betting today!

The Detroit Red Wings are having a terrible NHL season. They seem more in line to receive first pick for next year’s draft than they are to win the Stanley Cup. We would not bet on them to make the playoffs as we are pretty sure that they would need to win almost every upcoming game in order to ensure that remains possible.

With regards to the Stanley Cup, save your money. If you are looking for ways to make money on the Red Wings, bet against them in league games or try to go for over/unders that seem rather profitable at top US sports betting sites. 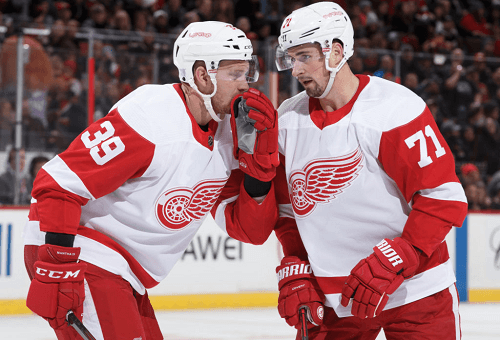 The Detroit Red Wings were formed in 1926 and form part of the NHL‘s Original Six. The team didn’t have as a good a start in the league as other teams in the league. In their first five years, they only made the playoffs once. Their form did begin to pick up thereafter. They made it to the Stanley Cup for the first time in 1934 and won it back-to-back in 1936 and 1937.

Following these two wins, the team retained a competitive streak from 1939 to 1966. In this period, they made it to the Stanley Cup 15 times, winning a total of five. Thereafter, the team went through a period of poor performance where they made it to playoffs a total of four times in 20 years.

This would change in 1987 after which the team entered into another period of great performances, making it to the Stanley Cup five times between the 1987 and 2004 season and winning it on three occasions.

Following the 2004-05 lockout, the team continued on good form, winning the Stanley Cup again in 2008 and making it to the finals again in 2009. However, following this appearance, they entered a period of decline continually performing worse in the playoffs until not making it all in the last three seasons.

If you are keen on betting on the Detroit Red Wings, make sure to have a look at these stats and facts:

In the last decade, the team has made it to the finals a total of seven times. It is important to note that the team has not made the playoffs in the last three seasons.