Montreal Canadiens odds have not lived up to what they were in decades past for some time now. As the most successful team in the National Hockey League (NHL), many lesser informed US bettors may expect them to be a good team to place a future on but that hasn’t been the case for nearly three decades. The Habs have not made it to the Stanley Cup finals in more than 25 years and have failed to win a Conference final in just as much time. With the team looking to miss postseason for the foreseeable future, they aren’t looking to be a prime pick despite what their history might suggest.

If you would like to learn more about betting on the Montreal Canadiens at US online gambling sites, you have come to the right place. Below we have highlighted all bettors need to know about placing wagers on this prestigious team. We have a look at their odds to win the Stanley Cup this season, their overall performance history and some interesting stats. We even list the sports betting sites with the best odds for US gamblers. So, what are you waiting for?

The Montreal Canadiens did not make the NHL playoffs last season, or the season before that. It’s safe to say that it looks as if they are about to continue that streak with the current season nearing the halfway mark. They have lost more games than they have won and don’t really seem to be doing much to improve their status.

The Habs have tasted success in the past but we would not place a wager on them to make it to the playoffs this season; let alone win the Stanley Cup. If you are considering placing a future bet on them, we’d say save your money and consider a new team or perhaps wait for next season. 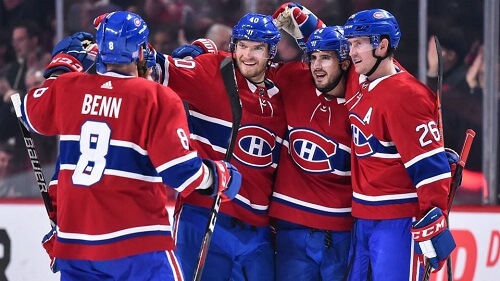 The Montreal Canadiens were formed in 1909. Not only are they a member of the Original Six but they are also the oldest hockey club in the NHL. With the team harboring such a long history, it is unsurprising that they have seen some success at certain periods of their lifetime. Their first ever Stanley Cup victory came in the 1915-16 season while still a member of the National Hockey Association.

After the formation of the NHL in 1917, the team looked to be struggling at first but quickly started making regular postseason appearances. In fact, between 1917 and 1967, the team missed the playoffs on only seven occasions. In the same period, they managed to win 13 Stanley Cup titles and make the finals on a ridiculous number of occasions, including a full decade streak from 1950 to 1960.

The team’s dominance continued for more than a decade after this as they picked up eight more Stanley Cup titles between 1967 and 1979. Thereafter, the team started seeing longer breaks between appearances in the finals only winning hockey’s biggest trophy in 1986 again. Although they did make it to the finals again in 1989, their next win after this would only take place in 1993, which remains their last win to date.

Since the 1993 season, the team has had a very unlucky run in the playoffs, failing to make it past Eastern Conference finals in good seasons, and not making it at all to the postseason. Fans of the team are hoping that they will return to their previous form soon but that does not seem as if it is going to happen anytime soon.

Before betting on the Montreal Canadiens, make sure to have a look at some of these fact and stats. Who knows; you may change your mind about the type of bet you want to make!