New York Islanders odds have been surprisingly in favor of a Stanley Cup win in recent seasons, following some great seasons with coach Barry Trotz at the helm. The team actually seems in line not only to challenge for their division and Conference titles but the Presidents’ Trophy too. But if anything is true in hockey, it is that the team that finishes at the top of the standings at the conclusion of the regular season is not always the team that goes on to lift the Stanley Cup. So, despite putting in stellar performances, are the Islanders capable of making it all the way to the finals?

If you would like to take these odds, make sure to have a look at our New York Islanders betting guide below. There, we have a look at the team’s odds of winning the Stanley Cup, their overall performance history and some quick stats and facts. We also list the best online gambling sites to place hockey bets at great odds. So, what are you waiting for? Scroll down and begin betting today!

The New York Islanders seem to be on a bit of a surprising up. At the halfway mark of the season, they seem prime to make the NHL playoffs and potentially even challenge to take both their division and conference if they are lucky enough. If you’re looking to place a bet on the Islanders to make the playoffs, we recommend taking the chance as they really do seem good for it, especially with coach Barry Trotz at the helm.

With regards to betting on a Stanley Cup win at US sports betting sites, we’d suggest remaining a bit safe and waiting until the postseason begins. The reason for this is that the Islanders were able to make it to the playoffs last season and knocked out the Penguins but were then knocked out by the Hurricanes in the next round. They have also dropped some surprising matches throughout the season. We think that perhaps its better to have a look at brackets after all the playoff teams have been decided and then place a bet on them provided that it looks like they are on good enough form to not suffer surprising upsets.

The New York Islanders were formed in 1972. This makes them the second oldest NHL team in New York. The team has had a bit of mixed history when it comes to performance in the league. Their early history was filled with team building efforts. This would eventually result in a great streak of success almost a decade later.

Between 1980 and 1983, the team was able to pick up four consecutive Stanley Cup titles, with the Islanders team of that period being considered one of the eight great dynasties within the league. Following this period of Eastern Conference domination, the team struggled to see any form of success. They failed to win a playoff game in 22 consecutive seasons.

Although the arrival of John Tavares in 2009 did give the team a glimmer of hope to see some victory, it was only after he left in 2015 that the team actually won another playoff game. Despite many considering the team unlikely to win the Stanley Cup, the Islanders have seen some success recently. Could 2019 be their year to lift the trophy that has eluded them for over 30 years?

If you think so, find the best New York Islanders betting odds at one of the sites above. You know you want to! 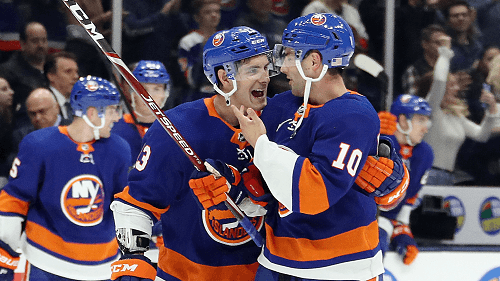 If you are keen on placing a bet on the New York Islanders, make sure to have a good look at the following facts and stats: