Ottawa Senators odds have been plummeting over the last few years. The team has performed pretty terribly over the last few seasons, not only failing to make it to the playoffs but also coming near bottom of the league. In addition to their terrible performances, they have limited success overall, with their best performance seeing them make it to the Stanley Cup finals more than a decade ago. They haven’t been able to live up to that performance since, despite making it to the Eastern Conference Championship finals again.

If you would like to learn more about betting on the Ottawa Senators, make sure to read on down below. We have created an Ottawa Senators team guide that is sure to help you make better bets. Some of the areas we cover in our guide include their odds to win the Stanley Cup this season, their overall performance history and so much more. We also provide bettors with the best online gambling sites for hockey betting. So, read on and find out all you need to know about betting on the Senators.

The Ottawa Senators are currently on a very negative streak in the NHL. Over the last two seasons, they have failed to make it to the playoffs finishing near to dead last in the league. This performance has continued into this season, with the team again struggling to make any progress in the league despite having made it to the Conference Finals in 2017.

With this in mind, we would not recommend that any US bettor place a future on the Ottawa Senators to make the playoffs or to win the Stanley Cup. Unless the team starts winning more games soon (and against some of the toughest teams in the league we might add), they will see themselves fail to make the playoffs again. We suggest that bettors save their money rather than making wagers at sports betting sites.

The Ottawa Senators have somewhat of an odd history in the NHL. Although the team is considered to be one of the founding members of the NHL (which first launched in 1917), the current version of the team is not the same as that which originally founded the league. This is due to the fact that the original team left the NHL in 1934 after a spate of financial difficulties and poor performance. This incarnation of the team was able to lift the Stanley Cup 11 times before disbanding.

The more recent incarnation of the team (the one that launched in 1992) has not experienced as much success in the Eastern Conference. In fact, the team’s best performance in the league was making it to the final in 2007. They would eventually lose to the Anaheim Ducks. During this period, the Senators seemed to have a more consistent team. They may have been good bet to make it to the playoffs, but this has changed in recent years.

Overall, in more recent years, the team has had some very inconsistent performances. One season had some analysts predicting that the team will come last in the league and then another had the side making it to the Conference Final. We wouldn’t recommend betting on the Senators when they make it to the playoffs (particularly if they’re going up against the Pittsburgh Penguins or the Toronto Maple Leafs) as their record really is less than desirable.

With the team currently going through some dramatic changes at the moment, it is really tough to say when their next playoff appearance will even be. But who knows? Anything can happen in hockey! 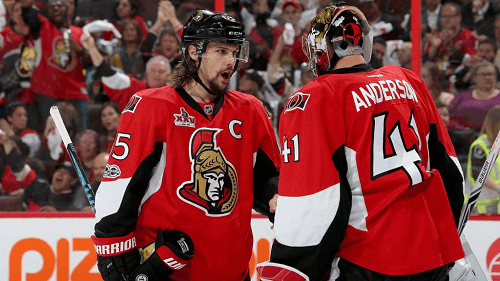 The following are some key stats of the current incarnation of the Ottawa Senators that was found in 1992. They may aid you in making better bets: