Pittsburgh Penguins have been pretty favorable in recent years, which is not all that surprising given their performances in the National Hockey League (NHL) over the last decade or so. Since 2008, the Penguins have made it to the Stanley Cup finals on four occasions with the most recent being a win in 2017. The team is pretty much been guaranteed to make an appearance in the playoffs even if they do not perform particularly well. Thus, there should be very little left to explain as why so many US bettors choose to wager on the Penguins time and time again.

If you would like to learn more about betting on the Pittsburgh Penguins, make sure to read on down below. We have created a dedicated guide to the team in the attempt to provide bettors in the United States with all they need to know to bet on the team. This includes a look at the Penguins odds to win the Stanley Cup, their overall performance history and so much more! We even provide bettors with a list of the best online gambling sites to place their bets at. So, what are you waiting for?

The Pittsburgh Penguins have been performing very well in the NHL this season even if they don’t lead their division at the halfway point of the season. They seem pretty much in line to make it through to the playoffs for the thirteenth straight season. So, we wouldn’t fault any US bettors who choose to put some money on them to make the playoffs in future at US sports betting sites.

A Stanley Cup future is a different story though. It is hard not to look at the fact that the team was swept last year in the First Round against the New York Islanders who they may very well play again this year. With the likes of the Boston Bruins and the Washington Capitals also performing phenomenally well, it may be difficult for them to make the Eastern Conference final, let alone the Stanley Cup.

Then again, the NHL playoffs are always unpredictable. We would wait to place a future on the Penguins but we would say that it is a safer option than placing the same bet on the Senators or Devils.

The Pittsburgh Penguins were formed in 1967. In their first few seasons, the team really struggled to find footing in the league, failing to make it to playoffs in almost as many seasons as they made it in their first two decades or so of existence.

Things really only began to change in 1990, which saw the team not only make it to the Conference Finals for the first time ever but also win the Stanley Cup. That year saw the team take their division for the first time too. This marked the beginning of the first era of great success for the Penguins. They would win the Stanley Cup the following year too and then the Presidents’ Trophy in the season following that.

For the next decade they would be a consistent figure in the NHL playoffs, making it to the Eastern Conference Finals on four occasions. This period of success would come to an end in the 2001-2002 season, which marked the first time the team did not make the playoffs in 11 seasons and the beginning of a four-year drought.

Following their third Stanley Cup win, the team regularly made a mark in the playoffs, often making it to the second round. They would win two more Stanley Cup titles in 2016 and 2017 and have remained a team to watch ever since. 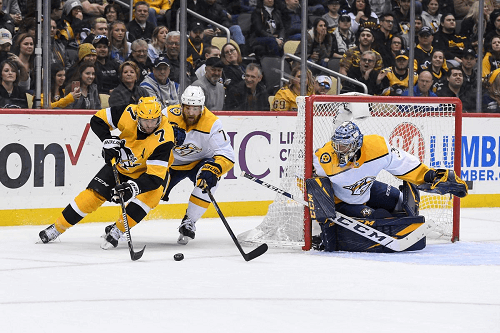 Before placing a bet on the Pittsburgh Penguins, make sure to have a look at some of the following stats and facts. After all, they may change your mind: