Toronto Maple Leafs odds have suggested that the team may actually have a chance of winning the Stanley Cup and ending the longest title drought in the NHL. That said, the team hasn’t really done anything to suggest that they do present a reasonable chance of winning hockey’s most famous trophy aside from making the playoffs in recent seasons. Even with the likes of Auston Matthews in the team, they have struggled to get past the first round of the playoffs for more than 15 years at this point. That in itself suggests that bettors should look at placing their money on another bet but it does seem that they are bound to get that win soon.

If you would like to learn more about betting on the Toronto Maple Leafs, make sure to have a look at our dedicated guide below. There we have a look at the team’s odds of winning the Stanley Cup, their performance history over the years and some quick facts and stats. We also provide bettors with a list of online gambling sites with the best hockey odds. So, what are you waiting for?

The Toronto Maple Leafs are quite famous for giving their fans false hope of them actually winning a title and ending their drought that has lasted more than 50 years at this point. We’d say that this is another one of those years where they have been poised to do very well, and are somewhat delivering in the regular season. So, at the very least, we expect them to make the playoffs.

That said though, they have made the playoffs over the last three consecutive seasons and have failed to progress past the first round. The last time they actually won a playoff series was in 2004, which puts any Stanley Cup futures in to question. Sports betting sites have still given them favorable odds though.

With players like John Tavares and Auston Matthews in the squad, it seems like the team may have a good shot of winning the NHL Stanley Cup. However, it is also important to remember that many a great team have gone without winning the trophy over the years. In addition to this fact, the Maple Leafs will need to overcome on form teams like the Washington Capitals and Boston Bruins to make the finals.

While the first half of the Maple Leafs’ existence was filled with Stanley Cup wins (13 in total), the second half of their history has been filled with disappointment. Since last winning the Cup in 1967, have only made a few Division Championship appearances and haven’t really managed to win any of them. The team’s Stanley Cup drought is actually the longest in NHL history.

With that said, the team is currently undergoing a massive rebuild under the hand of coach Mike Babcock. The team seems to be steadily improving with the team placing quite well in the Atlantic Division and Eastern Conference overall in the last few years.

While we wouldn’t usually recommend placing future bets on the Leafs, we will say that the team has been doing pretty in recent years. So, a bet on them to win it all may actually prove to be somewhat fruitful. This is especially true when one takes into account the fact that their offensive line up includes John Tavares and Auston Matthews. With this in mind, if you’re looking to place a good bet online, have a look at some of the sportsbooks up above. 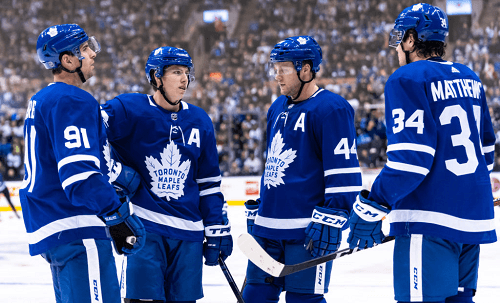 Before placing a bet on the Toronto Maple Leafs, it may be important to have a good look at some of the key stats and facts highlighted below: