Washington Capitals odds have been on the rise for some time now as it seems that D.C.’s favorite National Hockey League (NHL) team has finally found their stride. Following their absence from the playoffs in 2014, the team has made it to playoffs every single season, even winning their first-ever Stanley Cup title in 2018. It seems that the team is on the road to even more success making them a prime pick for many US hockey bettors looking at making big money on future.

If you would like to learn more about betting on the Washington Capitals, make sure to stick around. Below we have a good look at the Capitals odds to win the Stanley Cup, their overall performance history and interesting statistics to focus on when betting. We also provide bettors with a list of the best online gambling sites to place bets. So, read on and begin placing the best hockey bets!

The Washington Capitals are currently poised to take the NHL’s Eastern Conference and Presidents’ Trophy if their current form keeps up. With the season being as far along as it is, it may be worthwhile to have a good look at placing some futures on them to take their conference, division and even the President’s Trophy at sports betting sites.

Unless something terrible happens, it can almost be assumed that the team will make it to the playoffs this year. A Stanley Cup future is quite viable but as always, it is important to remember that anything can happen in hockey. As it stands currently, they will be forced to play strong opposition in the playoffs should they make it through.

We’d hold off a bit on placing a future at the moment so as to have a good look at the form of the Boston Bruins, Pittsburgh Penguins and New York Islanders – teams the Caps will need to beat en route to the Stanley Cup this year if they are to take the title. 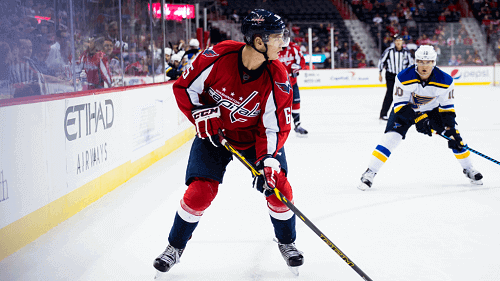 Founded in 1974 as an expansions franchise along with the Kansas City Scouts, it was owned by Abe Pollin. This makes the Capitals a relatively new team in the NHL, considering that some teams – like the Boston Bruins – were established in 1924.

During their first inaugural season, the Washington Capitals performed poorly. This could be because there were few players with professional experience on the team, which put them at a severe disadvantage. They set records for the most road losses, most consecutive road losses, and most consecutive losses in general.

After decades of really bad performance, the much later Capitals team managed to garner some wins. They won the Prince of Wales Trophy twice in 1997 and 2017. Also, they won the Presidents’ trophy in 2009, 2015, and 2016. Finally, they’ve managed to win the Stanley Cup in 2017.

Individual players in the team have also received some awards. Their most successful player, Alexander Ovechkin, has racked up a number of trophies with the Washington Capitals’ jersey on. He was the first captain to lead the Capitals to Stanley Cup victory. Some of these awards Ovechkin has won include the Conn Smythe Trophy, Art Ross Trophy, Calder Memorial Trophy, and the All-Rookie Team award to mention a few. Alexander Ovechkin 2005-06 season was one of his best. He set the NHL rookie record for scored goals. It was the fourth-highest total in NHL history.

The Washington Capitals have become an NHL betting Eastern Conference favorite over the years. Their legacy in the league may be a record of losses but, with an emerging squad of stellar players, it looks like the Capitals’ bad break is going to be a tale of rising from the ashes.

Before placing any bets on the Washington Capitals, you may want to take a good look at the following statistics: