Tonight’s list of NFL Madden simulations sees the Dallas Cowboys travel to California to take on the Oakland Raiders (which will no longer be happening in real-life following the Las Vegas move). Both teams come off relatively frustrating performances in Bovada’s Sim Classic tournament, which came to an end on Saturday and saw the New England Patriots crowned champions. (Even virtual Tom Brady just keeps winning.)

The Dallas Cowboys faired a bit better than the Oakland Raiders in the tournament, posting a record of 1-2, and making it to the playoffs with a tiebreaker. The Oakland Raiders posted the same record but were unfortunately unable to make it out of the group stage, and mostly because of unlucky field goals. So, who will win in this seemingly even game? 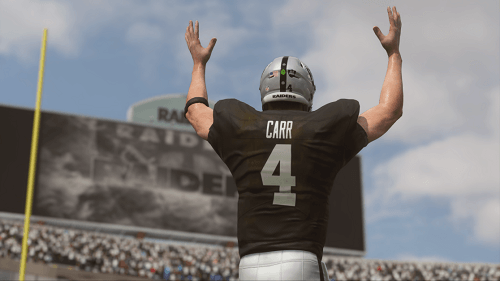 Well, let’s take a look at some of our stats here:

The Raiders and Cowboys are both good squads offensively but seem to lack some star players on their defensive line-up, which is an issue. The Raiders losing games by field goals is a clear symptom of the team’s poor defensive play, which is an issue when you go up against stronger squads like the Cowboys. It’s because of this that we recommend that you either take the Cowboys moneyline if you’re looking to bet on the end result.

Alternatively, you could also go for the over. With two strong offensive squads and poor defensive lines, it should be easy for these teams to get points on the board.

If you’re looking to bet on this matchup, make sure to sign up and do so here!