Tonight’s set of Madden 20 simulations sees the Dallas Cowboys take a trip down to the Golden State to play this year’s Super Bowl runner-up, the San Francisco 49ers. This classic has probably been run on Madden time and time before with the two teams maintaining a historic rivalry with some pretty famous NFC Championship moments.

But this simulation won’t feature Joe Montana or Dwight Clark. Instead, it will feature all the faces currently in the game, such as Nick Bosa and Dak Prescott. The 49ers look strong coming into this one, currently storming on their undefeated streak (as they did during the 2019-20 NFL season). However, the Cowboys look pretty beatable with their 1-2 sim record. Is this prediction really as simple as it seems to be? 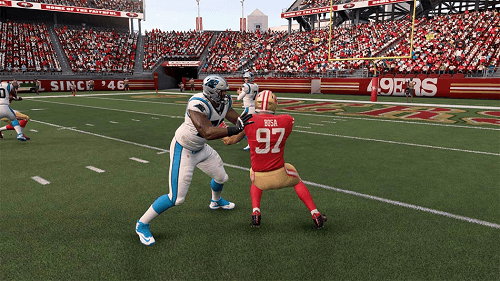 Well, let’s look at some of the team stats:

Go with the 49ers on this one. The moneyline still has a pretty fair return, and you’re feeling a bit risky take on the spread. The 49ers have been pretty dominant thus far for a reason, and the Cowboys haven’t quite been able to show their mettle so far, so we think it’s an easy one. But who knows? Anything can happen in these simulations!

If you are looking to place a bet on this game, you can do so here!