So, tonight’s NFL Madden list of simulations features another big NFC clash with the Philadelphia Eagles travelling to Levi’s Stadium to face the San Francisco 49ers. Time has been kind to the 49ers in real-life with the team having put on an amazing showing throughout the season, which was kind of unexpected to say the least. The video game seems to be just as good. Although they do come into this one off a loss against the New England Patriots.

The Philadelphia Eagles come into this game off a big win against the New Orleans Saints, which we didn’t think they would get. The team did start the 2019-20 season off as the best-ranked team in Madden 20, so some games are still sure to go in their favor. However, their performances overall are a little unpredictable, with the team susceptible to losses against seemingly easy team to beat. So, who will take it in this one? 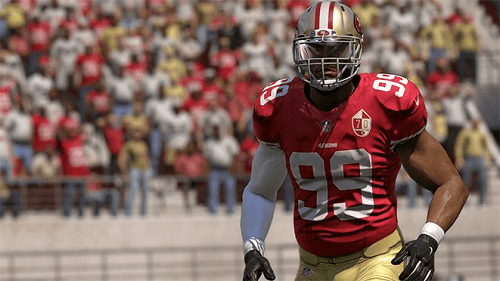 Before we get into our prediction, here is a look at some of the stats:

So, we were made to eat our words with the Eagles against the Saints yesterday. We thought that the Saints had it because of their overall offensive strength. However, this proved to be wrong. As the Eagles seem to show up in big games and the 49ers are coming off a loss, we’ll go with the Eagles on this one for better or worse.