New York Red Bulls betting is an extremely popular form of Major League Soccer betting. The team is consistently one of the top competitors in the Eastern Conference despite never having won an MLS Cup or US Open Cup title. The team has also got a strong dedicated support base that has stuck with them despite many Cup Final failures, which has at the very least helped them in winning three Supporter’s Shields. Thus, it is no surprise that so many bettors in the United States look to place wagers on the team.

If you are looking at learning more about betting on the New York Red Bulls, you have come to the right place. Below we go through the famous MLS team’s performance history as well as their odds to win the MLS Cup. We also list some interesting facts about the team fans may be keen to learn. So, read on and find out more about betting on The Metros at US online gambling sites.

Looking to place a wager on the New York Red Bulls? Be sure to have a look at these amazing sports betting sites! They have a load of wonderful bonus offers available for Major League Soccer bets.

The New York Red Bulls are not winners per se but they are definitely consistent. Therefore, placing a bet for them to reach the playoffs will pay off. Even though they have won the Eastern Conference regular season a total of five times and the Supporters Shield twice, they have not won an MLS Cup or US Open Cup title.

Thus, it is very important to put a load of consideration into a future bet on the team. The Red Bulls have quality players and a good history of making big games; statistics suggest that they should be able to pull it off someday. The real question is whether it will be this year?

Other than futures, the New York Red Bulls are a good team to place general moneylines and total bets at soccer betting sites too, which should be good in padding your bankroll.

The New York Red Bulls have operated under different names since it first came into formation. In the 90s, it operated as the New York Metrostars. It had its worst performance as a club in this era. They slid out of the Major League Soccer in 1999, but had a huge comeback in 2000.

In 2003, US soccer legend Bob Bradley was hired as coach. Bradley managed to lead the team to the US Open Cup final playoffs in his first season. In 2004, Bradley led the team to their first cup win, which was the La Manga Cup. This made the Red Bulls, then known as Metrostars, the first US soccer club to win a trophy outside North America. Unfortunately, this wasn’t enough to keep Bradley as coach as he was fired in 2005.

In 2006, Red Bull the energy drink brand took over the club and changed the club’s name to Red Bull New York. Not only was the name changed, the teams colors were changed to match their new sponsor’s brand colors.

The new ownership replaced the interim coach with Bruce Arena. That summer, the team amazed everyone by beating Bayern Munich 4-2 in a friendly match. The team has since gone through a flurry of different coaches each of which has failed to get the team their first MLS Cup victory despite good regular season performances. 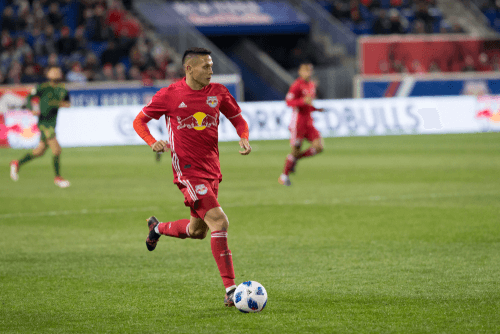 Are you a fan of the New York Red Bulls? Well, were you aware of the following interesting MLS betting facts related to the team: