Considering the long-standing history of the team, it stands to reason that the San Jose Earthquakes soccer team is the side to bet on. The Western Conference side of Major League Soccer (MLS) are part of the first ten MLS teams to form the league. Along with the history of the franchise, we’ve collected the best betting odds and lines for the San Jose Earthquakes. Check out some of the best online gambling sites in the United States to bet on.

What You’ll Find In Our Betting Guide

Now that the MLS has gotten bigger and better, it is much more difficult to choose the winner of the game. So much money has been put in the game, attracting some of the best players from Europe and the rest of the world to North American shores. The Quakes, as they are affectionately known by their fans, have tasted silverware in their early days, and their most recent win was in 2012. Their trophy cabinet includes two MLS Cup titles, in 2001 and 2003, and winning the Supporters’ Shields in 2005 and 2012. 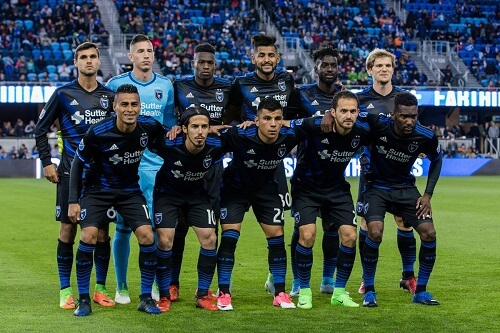 With these stats in mind, bet on San Jose Earthquakes’ next game and win. Bettors have to pay close scrutiny on the Western Conference standings and how the team is performing at a certain point in the season. Sports betting sites will base their betting predictions on the recent results as well as the opponent’s performances of late.

The Quakes haven’t had a good run ever since they took a two-season break in 2006 and 2007. Following their return, they haven’t kept up with other sides that have invested tons of money in the team. Find San Jose Earthquakes soccer betting tips below to help you make an educated bet:

Place a bet on the San Jose Earthquakes without worrying about the safety of your private information. We review the best MLS betting sites in the USA to shortlist the top five we recommend to bettors online. Choose from our top picks and bet today.