With Toronto FC being the biggest and oldest Canadian Major League Soccer teams, United States bettors can be sure that many bets have been placed on the team in all shapes and forms. With one MLS Cup and seven Canadian Championships to their name, the team has proven that it is very capable of bringing home some gold, which has made the team a pretty solid future option for many bettors in recent years. (Well, at least in comparison to other Canadian teams.)

If you are looking to bet on Toronto FC this season, make sure to do yourself a favor and keep on reading our guide down below. In our guide, we have a look at Toronto FC’s chances of lifting the MLS Cup again after their recent 2017 success, as well as the sportsbooks that offer some of the best lines on the team. In addition, we also provide US gamblers with some solid gambling tips. So, read on and find out more about betting on Toronto FC at online gambling sites.

Looking to place a bet on Toronto FC this season? Well, look no further; the sportsbooks down below have all the best lines on every MLS game, including those involving Toronto FC.

What You’ll Find In Our Toronto FC Betting Guide

While Toronto FC certainly have a chance of making it to the Eastern Conference playoffs, we wouldn’t recommend placing an MLS Cup future on them for a couple of reasons. Firstly, if the team does qualify for postseason, it seems like it is going to be through the skin of their teeth.

Secondly, the team’s overall performance has been inconsistent. They have pulled off some big wins against favorites such as Atlanta United and New York City FC, but have also picked up defeats from some opposition that hasn’t been doing too well at all.

If you’re a fan looking to place a bet on Toronto FC that may actually payout, we recommend taking a look at totals or props. The team has seen a fair number of games exceed two goals, so we do suggest considering some offers at the best US sports betting sites. In addition to this, there are some prop bets available before and during the game all bettors may want to have a good look at.

Toronto FC was formed in 2005 and played their first season in Major League Soccer in 2007. The team is owned by Maple Leaf Sports & Entertainment (which also own the NHL’s Toronto Maple Leafs and the NBA’s Toronto Raptors, among other teams.) The team was the first Canadian side to join the storied soccer league.

Despite struggling to find the back of the net in their early years, the amount of support surrounding the team was easily noticeable. Although the team pretty much failed to make it the playoffs for the first seven years of their existence, they were pretty successful in the Canadian Championship, winning four back-to-back titles between 2099-2012.

The team’s turning point really came in 2015, when they qualified for the for the MLS Cup playoffs for the first time in their history. Although they were knocked out early, the performance was a predecessor to what was to come.

Between 2016 and 2017, Toronto FC had back-to-back MLS Cup appearance, taking on the Seattle Sounders on both occasions. Although the Sounder won the first match-up on penalties, Toronto FC redeemed themselves in 2017, winning not only their first MLS Cup ever, but also their first-ever domestic treble.

Although 2018 proved to be a terrible year for the team in the MLS, they were still able to pick up their eighth Canadian Championship title along with finishing runners-up in the CONCACAF Champions League. With the side’s recent zigzag form, who knows how they will perform in future? It is good to keep up with the lines at soccer betting sites though! 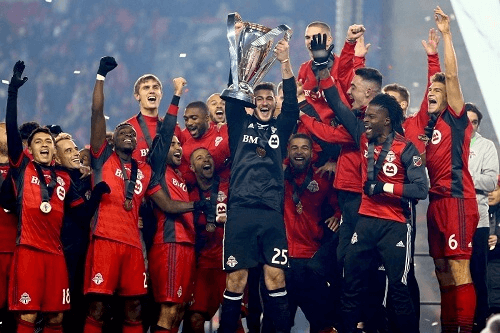 Once bettors understand how to place a bet on the upcoming season, they have to consider all of the MLS betting odds. A bet should not be driven solely by which team you support. The team’s odds of winning the tie also play a huge role along with the following factors:

Are you a Toronto FC super fan? Well, then maybe you’ll be interested in the following facts about the team: