The Canadian Open, currently known as the Rogers Cup, is one of the oldest tennis tournaments in the world. This exciting showdown is not a grand slam, but champions like Andy Murray and Serena Williams have won in Canada. As such, the Rogers Cup is hosted either in Montreal or Toronto on alternating years during August.

In even number years, the tennis tournament is hosted at the Aviva Centre in Toronto. During odd numbers years, it’s hosted at the IGA Stadium in Montreal. The Canadian Open is a hard court/outdoor event for men and women. For male players, it forms part of the Masters 1000 category. While for female players it’s under the Premier 5 category. 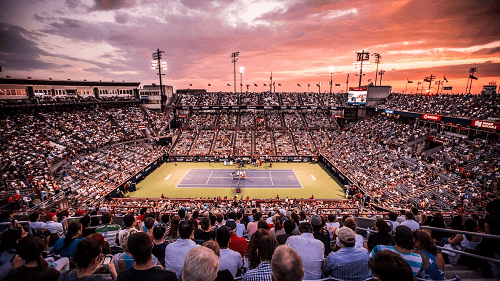 What You’ll Find In Our Rogers Cup Betting Guide

For professional players, the Rogers Cup falls under two categories. These categories require players to take part in a set number of tournaments. Since the Canadian Open isn’t a grand slam, players in previous years could choose to opt out to rest for the US Open. Still, new regulations have made the Rogers Cup compulsory for men and women under their associations.

For many years, the men and women’s tournaments were held separately. However, this changed in 2011 to fall in with the WTA’s legislation. Due to the proximity to the US Open, the women’s matches were moved to the same week as the men’s. Starting in 2011, the corresponding rounds for both genders were held on the same day, just a few hours apart.

Bets for the Canadian Open

Betting on the Rogers Cup is easy with our recommended online gambling sites. They offer all of the latest odds for the Canadian tennis championship. This year, they’ll also have live betting options for players from specific states. So keep your eyes on the players ahead of the tournament. After all, it’s anyone’s game in Canada.