The Toronto Blue Jays and Washington Nationals game is set to be a thrilling one for fans. The Nationals will play host to the Blue Jays in the first day of the three-day interleague series on Tuesday afternoon.

Tanner Roark will take the mound for the Toronto Blue Jays. The 33-year-old right-hander will be countered by Austin Voth for the Washington Nationals.

Back in 2018, the Blue Jays made mincemeat of the Nationals and we wonder if the same will happen during this season. 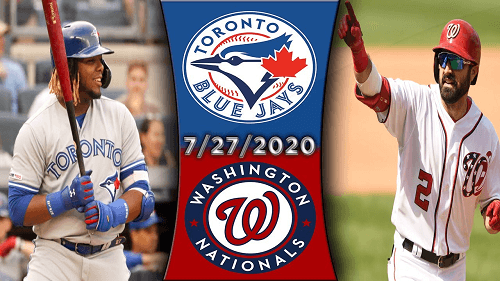 Let’s take in in-depth look at both teams to see how their strengths and weaknesses will affect their gameplay this afternoon.

It will be interesting to see how Tanner Roark performs against his former team of six years. Roark will make his Blue Jays debut on the mound this afternoon.

Austin Voth will be starting for the Nationals in this matchup against the Blue Jays. In 2019, he performed well. He also earned himself a solid 3.30 ERA and 1.05 WHIP. This afternoon he will be meeting the Toronto Blue Jays for the first time in his career.

The Blue Jays are well-poised to take this one. Tanner Roark will be eager to prove himself against his former team, so he should be well-motivated for this game.

The lineup that Washington has is not quite as lethal as in previous seasons. Their best payers, Juan Soto and Ryan Zimmerman, are down for the count for this game. Plus, the Blue Jays have youngsters who are not shy to score runs. In their first three games, they recorded a combined 12 runs record.