Online Gambling » What Does Jack Mean in Poker?

What Does Jack Mean in Poker?

After playing poker for some time, you may be wondering what the Jack means or why it is even called the Jack. Well, we have the answer, and you are in for a bit of a history lesson. The history of this card dates by to the 1800s and it is quite interesting.

The Jack is the lowest-ranking face card in many poker games. In fact, some poker games require you to hold a pair of Jacks or better to open betting. Find out more on what the Jack means in poker below. 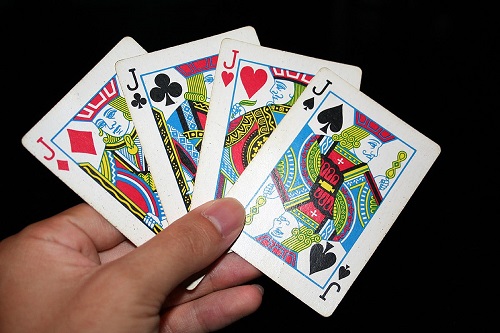 What is a Jack?

The Jack, also known as the Knave, is a card found in traditional English and French card decks. It has a picture of a man in a historic dress code generally associated with the 16th or 17th century.  The card ranks between the ten and the queen card.

So, why is the card called a jack rather than a prince or any other nobleman? Well, in the 19th century, it felt necessary that the corners of each playing card be labelled with their value. The markers automatically picked the initials of each card.

The king was labelled K, the queen with a Q and because the card was still called Knave, it would be Kn. Naturally, distinguishing between the King and the Knave got slightly confusing. So, the card was changed to a term associated with a common man; Jack.

How Many Jacks are there in a Deck of Cards?

There are four Jacks in a 52 deck. There is a Jack of hearts, spade, diamonds, and clubs. The cards also have mythological names associated to them.

Well, there you have it. Jack’s history has been carried through in many poker games where the card makes part of some winning ranks. You can think of it as the greatest helper such as Ogier, La Hire, Hector, and Lancelot. All of which played a huge role in history.

Before you assume that having a J in your hand counts as an automatic win, make sure you understand the game you are playing.