Will Freddie Kitchens Take the Fall for the Cleveland Browns’ Bad Start?

Freddie Kitchens was meant to be one of the last remaining puzzle pieces in creating a Cleveland Browns team capable of finally making a Super Bowl run. The team’s former offensive coordinator was named head coach after making some huge strides together with Baker Mayfield in turning the team’s offensive unit into a more threatening force last year. However, three games into the season, and the Browns are touting a 1-2 record, and NFL fans are wondering what exactly is the team’s problem.

Some have pointed to Baker Mayfield’s subpar performances as being one of the team’s core issues, and while that may true, it is very clear the offensive line itself is not really working well together. With more than 20 fouls having been committed over the last three games, it is clear that there is an issue with discipline and that’s not Mayfield’s fault but rather Kitchens.

In addition to this, very few NFL fans could look past that Kitchens has made some pretty bizarre calls in his last three games in charge. Essentially, decisions no one in their right mind would make if put in as coach of a professional football team.

Take the decision to try a draw play on the Rams 40-yard line on fourth and nine while trailing in the fourth quarter. This specific play has had football fans scratching their heads because nobody ever would think to try something in such a dire situation. After the game Kitchens commented on the play, basically stating that the idea was to try something unexpected and see if it worked, but it didn’t and the obvious consequences are attacks on Kitchens credibility as head couch.

Freddie Kitchens: All Bark and No Bite? 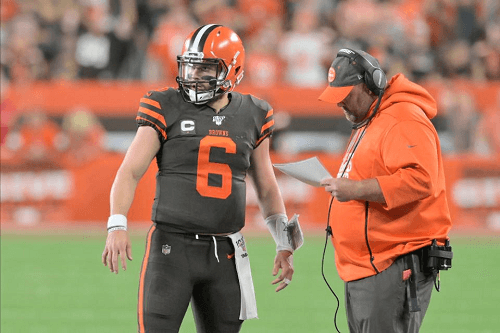 It’s safe to say that Browns fans (and probably very many bettors too) are very disappointed in the performance of the Browns in these last three weeks. As previously mentioned, everybody thought that Freddie Kitchens together with Baker Mayfield were meant to turn this historically unlucky team around. However, this has not happened.

It’s difficult to be a coach of any professional sports team, especially one that has got a strong fanbase. Coaches are expected to deliver results, especially when a team looks to be so good on paper. When this doesn’t happen, your knowledge of the game is questioned, and your every error is broadcast to the world and overanalyzed to death.

In the situation of the Browns and Freddie Kitchens, it may be that Kitchens is the right man for the job, and has only made questionable decisions in the last few games due to the pressure he is under for the team to perform. (The Browns were one of the most over-hyped teams before the season began after all).

Baker Mayfield has also not been performing as many were expecting him to this season. It is fully possible that the quarterback experienced a fluke rookie season, and that he really isn’t the man to lead the team to their Super Bowl win.

This all said though, Kitchens is going to start not only making better calls, but ensuring the discipline of his offensive line if he is going to keep his role of head coach. If there weren’t so many clear faults in the team that could possibly be repaired by a change in leadership, there wouldn’t be people questioning Kitchens capabilities of managing a team. Whether or not Kitchens will adjust his strategy, and the Browns will get back on track remains to be seen.