Despite being one of the oldest teams in the National Football League (NFL), Arizona Cardinals betting has not been all that fruitful for US bettors throughout the years. The team’s last major win was NFL Championship title in the 1947 season, and although they have been competing in the league ever since it began, they have only ever won seven division championships. Overall, the Cardinals are the team gamblers in the United States want to bet on if they intend on growing their bankroll.

Some bettors have been tempted to have a go at wagering on the team following a recent good run that saw them make it to the NFC Championship some years ago. If you are one such bettor, and would like to learn more about betting on the team, make sure to stick around. In our team guide, we have a look at the Cardinals odds to win NFC West and Super Bowl, as well as their overall performance history.

We also provide a list of online gambling portals that should give you a perfect opportunity to bet on the team. So, what are you waiting for? Read on and begin making better bets on the Cardinals today!

If you’re looking for the best Arizona Cardinals betting lines, make sure to have a good look at the US sports betting sites listed down below. They are sure to provide you with the best odds on whatever Cardinals bet you could ever wish to make.

What You’ll Find In Our Arizona Cardinals Guide

The National Football League‘s Arizona Cardinals are coming off a season that saw them go 3-13 for the first time in almost 20 years. Although the team has replaced head coach Steve Wilks with Kliff Kingsbury (whose NCAA offensive record speaks for itself), online sportsbooks are still not convinced that this enough to turn around the sorry situation in Arizona.

Fans and prospective bettors are hoping that the addition of quarterback Kyler Murray will help the team reach a couple of successful results, but Kingsbury is an untested coach at the professional level. It seems that the situation could go either very well or very badly for the team this year. It also important to remember that successful coaches at the college level aren’t always successful in the NFL too.

Overall, we wouldn’t recommend betting on the team. Perhaps, later in the season, this recommendation will change, but at the moment, the Cardinals aren’t exactly provided a good reason to get behind them for a Super Bowl run, or even a good go at the NFC West for that matter. It is also important to remember that they will be competing with teams such as the Los Angeles Rams who are currently some of the favorites to win the Super Bowl.

Check Out Our Other NFC West Guides:

Established in 1898 in Chicago, the Arizona Cardinals joined the NFL as a charter member in 1920. The Cardinals have won two NFL championships while they were in Chicago in 1925 and 1947. Their first win was controversial, with the supporters of their opponents – the Pottsville Maroons – claiming that they won the title. Their second win was nearly two decades before the first Super Bowl. But they have failed to win the Super Bowl Championship.

Apart from their pre-Super Bowl wins, they won the NFL Western division in 1947 and 1948. Other divisions they’ve won include:

They’ve had ten NFL playoff appearances and four appearances in league finals, including the Super Bowl once. They lost the 1948 championship to the Philadelphia Eagles. In 1974, 1975, and 2014 they didn’t make it past the NFL’s NFC wild card playoffs, while they didn’t get past the divisional playoffs in 1998 and 2009. 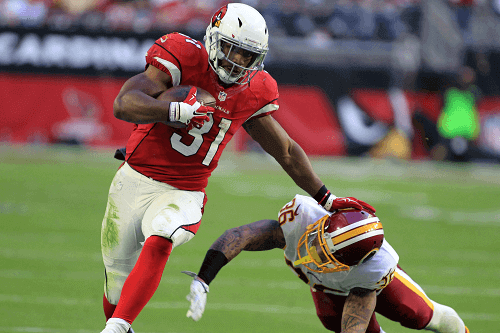 If you are looking at betting on the Arizona Cardinals, make sure to have a good look at some of the team facts and stats listed below: