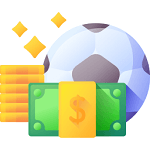 Fantasy sports leagues have been around since the 1950s, with the first-ever game having been built around baseball. However, this game of skill or form of gambling (depending on how you look at it) has seen a boom in popularity over the last decade or so. Each and every sports season, millions of people play fantasy games as it adds so much more to watching popular leagues.

Essentially, with fantasy sports gaming, you get to put your money where your mouth is and assemble your own imaginary team based on players in real-life sports leagues. The performance of your team is determined by real-life player performance in real matches. Most sports fans soon realize that picking players that continually perform well while staying within the salary cap is pretty difficult.

Major sites like DraftKings and FanDuel offer loads of daily fantasy sports league contests based on the NFL, MLB, NBA, and the NHL, among other popular tournaments. So, the opportunity to try your hand at building a fantastic sports team while standing a chance to win real money prizes is readily available.

If you’re looking to get into the exciting action of fantasy sports gambling, you’ve come to the right place. Below we cover all you need to know, including:

We also list our favorite online gambling sites for both traditional sports betting and fantasy games. So, scroll down below and get started.

This list includes some daily fantasy sports betting sites, which has proven to be the most popular type of fantasy games.

How Do Fantasy Sports Work?

Playing fantasy sports is rather simple. But if you are unsure of how everything works, let us take you through the basics:

Whether or not fantasy sports players need to bet money to be involved in a league is dependent on the league joined. Nowadays, even sports news websites, such as CBS and ESPN, can be considered DFS operators because they run leagues.

Some of these sites run free fantasy leagues that offer you the chance to win prizes without spending a cent.

However, if you join a league run by a DFS and sports betting site, such as DraftKings, you will need to pay an entry fee. A small payment to join a league that could offer million dollar prizes is worth it in our opinion.

There are many types of games available to play at fantasy league betting websites. Some of the most popular include the following:

It is important to note that these games can be broken down into two further formats:

The following sports have proven to be really popular with the vast majority of fantasy sports fans that visit Gambling360.com:

Check out all the most popular fantasy sport options here:

While more specialized fantasy sports betting strategies may vary on the type of game, there are a few general tips that can be useful in getting started with a team. Here are some tips from the best fantasy players on the Gambling360.com team:

Check out our other popular betting guides:

This is currently a huge issue within the United States, particularly with the recent Supreme Court ruling on sports betting. Ultimately, the answer to this question is really dependent on the state you live in and how the gambling laws are structured.

Some states consider fantasy sports betting to be somewhat of a legal grey area. They believe the activity to be a skill-based game as opposed to a form of sports betting. So, in such states, gambling can be illegal, but you can still participate in fantasy games.

However, other states consider fantasy sports games to be a form of gambling. So, if gambling is illegal in that area, you will not be able to participate in these games.

Be sure to keep checking your state laws surrounding the activity to see if any amendments have been made in the recent past. There are four states where DFS contests are definitely illegal, and these are Arizona, Washington, Montana, and Iowa.

What is fantasy sports betting?

A fantasy sport is a game that sees people build imaginary teams using players from a real professional sporting league. Players earn points for a team based on their performances in real matches. The team that earns the most points within a set period of time is the winner.

What is the most popular fantasy sport?

Fantasy football is the popular fantasy sport. It is closely followed by fantasy baseball, which was the first such game ever created.

Yes, you can make money, but you have to understand that you will usually have to place a bet to make money. Some sites do run promotional fantasy games, but this is not a sustainable way to make money from gambling.

Should fantasy sports be considered gambling?

This is a hard one. We don’t think that they should because of the amount of skill involved in the games. Ultimately, you are pretending to be a real-life sports coach or general manager. You have to undertake the same challenges they would with the real sport, except your decision don’t affect a multi-million dollar corporation.
However, to play this role, you have to pay a fee, which could later lead to a reward if all these go well. One could argue that the draft mechanics simulate gambling, but then the NFL draft is all based on chance, isn’t it?

What is the best daily fantasy football site?

The best daily fantasy football sites are DraftKings and FanDuel.

How do fantasy sports make money?

You need to pay to join leagues at a fantasy sports betting site. The joining fee is usually calculated concerning the total prize players can win.

How big is the fantasy sports industry?

The fantasy sports betting industry is estimated to be worth around $8 billion. More than 60 million people in the United States alone take part in fantasy sports games.