Miami Dolphins betting is popular in Florida because that’s where the National Football League (NFL) team comes from, but other states across the USA can also take part. The team isn’t really hasn’t seen a load of great performances in recent years. So much so that bookies have given them some terrible odds of making it to the Super Bowl this year. They also aren’t pegged to do much in the AFC East either, but there may still be a few reasons to consider placing a wager on them.

If you are an avid sports bettor in the United States, and are looking to place a bet on the Miami Dolphins, we urge you to have a look at our betting guide down below. Not only do we take a look at the Dolphins odds to win the Super Bowl this year, but we also list some amazing NFL online gambling sites where you can place your choice wagers on the team. So, what are you waiting for?

Bet on the Miami Dolphins Here

Are you looking for the best Miami Dolphins betting odds? Then, make sure to have a look at the sportsbooks listed down below. Each offers a wide range of betting lines on the team at some very competitive odds.

What You’ll Find In Our Miami Dolphins Guide

The Miami Dolphins have not made any Super Bowl appearances in recent years. In fact, even simple playoff appearances have been rather rare. Following the dismissal of Adam Gase and the appointment of Brian Flores, it seems that the team is in another period of re-building – a state which it has seemingly been in since Dan Marino retired.

Ryan Tannehill has also been replaced by rookie Josh Rosen who could be the quarterback the team can build a dynasty around, but bookies aren’t banking on that taking place in the 2019 season. There have been other dismissals and additions, but none of this has been enough to convince neither sports betting sites nor fans of impending Dolphins success.

Overall, we would not recommend placing a future bet on the Dolphins to win the Super Bowl. Many sportsbooks have pegged the team last of all 32 teams to lift the trophy at the end of the season and this should be pretty telling.

If you still wish to bet on them though, we recommend looking at some props and totals available throughout the American Football Conference regular season. Any bet that isn’t dependent on the overall outcome of the game really. 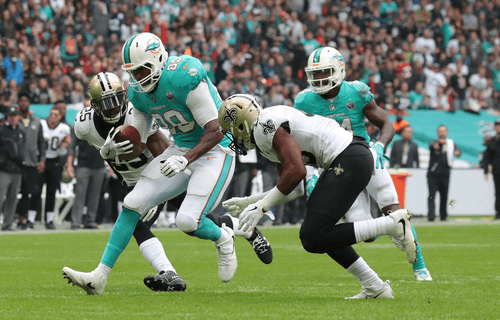 The Miami Dolphins were formed in 1966 as an expansion team for the American Football League (AFL). The Dolphins never really saw any success in the AFL, but this all started to change when the league merged with the NFL in 1970. The team hired the legendary Don Shula as coach, who would lead the team to five Super Bowl appearances.

The first three appearances came between 1971 and 1973. Although the Fins failed to win the title in their first appearance in football’s biggest game, they were able to pick up back-to-back wins in 1972 and 1973. The team was also able to set the record for the longest shut out in a Super Bowl match.

The next set of appearances in the Super Bowl came in 1982 and 1984 as future Hall of Famer Dan Marino came into his prime at quarterback. Unfortunately, the team was unsuccessful in winning the title on both occasions.

Under the leadership of Shula, the Dolphins only saw two losing seasons. However, a lot changed following his retirement in 1995, and Marino’s in 2000. Since then, the team has struggled to make it to the playoffs, making it three times since 2001. This could be due to the New England Patriot’s rise in prominence, but the team has been rather mediocre as a whole.

Fans still hope that the Miami Dolphins will one day return to their former glory. For now though, we recommend betting against them.

Check Out Our Other AFC East Guides